Catch the Flame – the Faith of the Gospel on Fire
Covenanters
The Covenanters were a group of faithful ministers and Christians in Scotland who worked to uphold the principles of the National Covenant of 1638 and Solemn League and Covenant of 1643 in order to establish and defend Presbyterianism against the imposition of Episcopacy by the state. They suffered severe persecution through imprisonment, fines and execution rather than abandon their principles.
25 Sep, 2015

Revival is the weak flame of the Church being reignited by the power of the Holy Spirit. Reformation is Christ’s refining fire to purify and transform His Church. The Second Reformation in Scotland was both a revival and reformation.

It was not simply that the faith of the gospel was maintained and proclaimed. It was on fire across the nation and in the hearts and lives of believers. It was a burning fire within the hearts of preachers so that they could not do anything but declare it with power.

This is the description that John Macleod gives in his classic Scottish Theology.

It was the faith of the gospel on fire that wrought so mightily in those days of the seventeenth century.

Scottish Theology in relation to Church History is full of momentum and interest. It interweaves biography, history and doctrine in an engaging way. This is not a cold and technical book but full of human interest.  A fresh reprint by the Banner of Truth Trust is now available.

Macleod shows how the Second Reformation took the flame of the faith of the gospel from “the godly evangelical fathers” of the Reformation. Their “plain undiluted teaching of sovereign grace” was applied earnestly both in preaching and catechising.

“This was to be found in a rich and full exhibition of the doctrine of grace alike as it builds on the humbling revelation of man’s sin, and of God’s wrath called forth thereby, and, on the other hand, as it sets forth a salvation that is all of God and all of grace in its inception, in its provision, and in its effectual bestowal.

This doctrine of salvation they drew from the Scriptures which they took at their own valuation and so looked upon as the very word of God. The truth of this divine message they laid to heart as it told them their own doom and that of their fellows. The truth too, of its message they believed when it spoke to them of Jesus our Lord as the Saviour of sinners. They received it as truth when it told of what he has done and won and of how he lives to bestow the life that he died to secure.

They would not be content unless they had him as their own. And as they felt their fellows to be sinners like themselves, under the same curse and needing the same blessing, they yearned over their souls, set forth to them the truth of law and gospel and with all earnestness besought them to flee from the wrath to come and betake themselves to Christ the Lord.

They bore witness to the truth. They warned of danger. They entreated. They exhorted. They reasoned. They taught. They called. They invited.

Nor was their ministry left without the seals that attest the power of the gospel. For as they were anointed richly with the spirit of their office they preached the gospel with the Holy Ghost sent down from heaven to crown it with success in his new-creating power.

A message sent forth with such power carried with it its own credentials. The faith that it called into being saw with opened eyes the evidence of the truth that it welcomed. Thus convinced sinners had, like those who heard the apostles, a witness in themselves which left them satisfied that what they welcomed was no cunningly devised fable, but the very truth of God.

A community which got the good of such a message was rooted in the doctrine of the gospel and tended to become one that was very theologically minded. And this was none the less the case as the outcome of the catechetic method of instruction that was current in the Reformed churches and in the use of which the Reformed church in Scotland did not lag behind her sisters”. (pp.103-105).

Read the article “Scotland’s Greatest Revival” to learn more about how the Second Reformation was the period of greatest revival throughout the whole nation that Scotland has ever experienced. 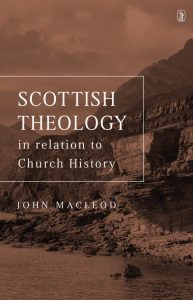 Scotland has made a unique contribution in the field of theology, and the influence of its theologians has been and continues to be felt across the world. Indeed it was an American audience for whom John Macleod prepared this narrative of Scottish Theology, which was originally delivered as lectures to students at Westminster Theological Seminary.

Order here
← Can Suicide be "Profoundly Christian and Moral"? 6 Reasons Why You Must Search the Scriptures →