Why is God Angry with Our Nations?
Covenanters
The Covenanters were a group of faithful ministers and Christians in Scotland who worked to uphold the principles of the National Covenant of 1638 and Solemn League and Covenant of 1643 in order to establish and defend Presbyterianism against the imposition of Episcopacy by the state. They suffered severe persecution through imprisonment, fines and execution rather than abandon their principles.
6 May, 2016

These are unprecedented times, at least in living memory. Every area of national life is being disrupted and reduced. It will not be the same for quite some time. Everyone is asking how we respond to this. No one asks why it has happened. As with many nations, we are on a course of determined rebellion against God’s Word. This is the root of our national sins. Does God judge nations for national sins? Yes, the predicted destruction of Judea in AD 70 gives clear and solemn evidence (Luke 19:41-44). There are also many Old Testament examples such as Nineveh. One aspect of God’s wrath being revealed is when He gives people up to gross sins and a reprobate mind (Romans 1:18 and 24-32). Such spiritual judgements are worse than those on the economy, health and stability of a country. Is God judging our nation in this way, and if so why? This may sound like a bleak message, but there is hope if we give serious heed.

During some periods in the past, it seems that God’s people were more sensitive to national judgements for national sins. February 1645 was one such period when the Church of Scotland decided to issue a solemn warning and call to repentance to be read in every parish.  Plague was also beginning to afflict the cities of Scotland, causing the deaths of thousands. Famine was advancing. They believed these things were the voice of God’s sovereign providence speaking to them. “God is writing bitter things against this land in great [large] letters”. There were many enemies to the cause of God, both open and secret. This especially included some of those in the highest places of government. There was deep division and conflict within the nation; the battles of the civil war appeared to be going against those that were faithful.

It was a bittersweet time. They also had reasons for thanksgiving that God was prospering the work of reforming the Church throughout the British Isles. They rejoiced “that our Lord Jesus Christ is no loser, but a conqueror”. His ordinances were being established and His cause prevailing in the Church. The “work of purging and building his temple” was going forward not backward. Yet they knew by experience that the work of reformation could not move forward if repentance was being neglected.

Despite all these hopeful signs there was still “heavy judgement” and they needed to discern why. God was showing to everyone in the land, whether high or low, their exceeding sinfulness.  Every congregation, every family and every individual had a duty to “examine their own hearts and ways and to mourn for congregational, domestic and personal sins”.  “Cursed shall they be who have added fuel to the fire, and now bring no water to extinguish it; who had a great hand in the provocation, and bear no part in the humiliation. Let every one commune with his own conscience, and repent of his, even his wickedness, and say ‘What have I done?’

The General Assembly were mainly concerned, however, with national sins. They gave priority to sins in spiritual things as those that provoke God most. Perhaps we think of national sins as the gross sins that prevail and are celebrated in the land. We should also discern national sin when political rulers legislate against the Word of God. Yet many national sins come much nearer to home.

1. Our Neglect of Faithful Service

2. Our Neglect of Real Reformation

The nations of Britain had united together in a Solemn League and Covenant with God to pursue real personal reformation. They were breaking the Covenant in failing to follow this out in their personal lives just as much as if they neglected Church reformation. They said “our covenant is broken by the neglect of real reformation of ourselves and others under our authority. “Let everyone ask his own heart what lust is mortified in him, or what change wrought in his life since, more than before the covenant?”

They also lamented that there was still too much gross sin abounding. This included: “swearing, cursing, profaning the Lord’s Day, fornication and other uncleanness”. There was also drunkenness, injustice, lying, oppression, murmuring, repining and other sorts of godlessness.

3. Our Neglect of Thankfulness

The Covenanters acknowledged that they had “not glorified God” in proportion to the great things that He had done for them. Rather than making best use of all His merciful dealings with them they had in measure forsook God. “We have not walked worthy of His love.” “And this great unthankfulness filled up our cup”.

Despite this great guilt they had acted presumptuously. They undertook weighty matters such as going into battle “without repentance, and making our peace with God, like the children of Israel, who trusting in the goodness of their cause were concerned with nothing more than: ‘Which of us shall go up first?'” Perhaps we today are also quicker to take up the weapons of lobbying and protest without first humbling ourselves before God.

Ministers were faithfully to exhort and admonish concerning these duties as they had opportunity. The appropriate response was for the nation to humble themselves in relation to their national sins. There should also be “repentance, faith, amendment of life and fervent prayer”.

To clothe ourselves with our shame as with a garment, to justify God’s righteous judgements, to acknowledge our iniquity, to make our supplication to our judge, and to seek His face, that He may pardon our sin, and heal our land…We do not mourn as they that have no hope, but we will bear the indignation of the Lord, because we have sinned against Him, until He plead our cause and execute judgement for us.

The General Assembly concluded their solemn warning with a message of hope. “Deliverance and good success shall follow those who with purpose of heart cleave unto the Lord, and whose hearts are upright toward His glory”. They were persuaded that God had lifted up their enemies so that their fall would be all the greater “and that He may cast them down into desolation for ever”.

We have many national sins that did not prevail in the past as they do now. There is widespread blindness to our state which is in itself a judgement. Another token of God’s anger with our nation is in giving us rulers that are aggressively pursuing a deeper and faster course of rebellion. A greater work of personal and family reformation is needed as well as Church and national reformation. It would be easy to despair but the same infinite source of encouragement is available. They encouraged themselves in God and therefore strengthened their hands to seek His glory. The final motto issued by the Assembly reflects a true spirit of repentance and reformation.

Arise, and let us be doing. The Lord of Hosts is with us, the God of Jacob is our refuge. 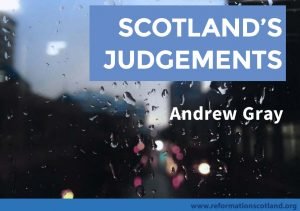 Scotland’s Judgements is a sombre warning against national sins before a holy God. Drawn from a letter written by Andrew Gray on his deathbed, it speaks plainly about the way in which such sins provoke God. These solemn laments do not forget God’s mercy. Yet they must make us to tremble for 21st century Scotland’s national sins at a time when they are abounding and increasing. It is relevant, however, to any nation in similar circumstances.