Heavenly Violence in Prayer?
Samuel Rutherford
Samuel Rutherford (c. 1600 – 1661) was one of the foremost Scottish theologians and apologists for Presbyterianism in the seventeenth century, playing a major role in formulating the Westminster Standards at the Westminster Assembly. He is best known for his many devotional letters and Lex, Rex–his seminal work on political sovereignty.
24 Jun, 2016

We are more likely to think of prayer as bringing peace and comfort than something which could be violent. It has a strange ring to it.  Yet Scripture describes fervent prayer as wrestling and striving. Perhaps it sounds strange because we have become used to weak and cold-hearted prayers?

Samuel Rutherford wrote and preached a great deal about prayer. His letters alone contain almost 440 references to prayer. The following is one of them: “I think it easy to get anything from the King by prayer, and to use holy violence with Him”.

This holy violence arises from a fervent spirit expressing its desires to God. Rutherford helped to formulate that masterful definition of prayer in the Shorter Catechism:  “Prayer is an offering up of our desires unto God, for things agreeable to His will…” He emphasises that prayer is essentially vehement in character. “Lazy, cold and dead prayers are condemned. Many pray, and care not whether God hears them or no; they pour out, not their desired before the Lord, but naked single words, and do but take the name of God in vain”.

This should condemn distracting thoughts and wandering of spirit in prayer. Not only is the whole man and whole strength not set on work in these prayers, but not any at all of the spirit is there, but the heart gone a-whoring after thoughts of vanity. Now, can the man pour out that which is not within? The spirit is gone out after other lovers, in so far it is a non ens [non-entity], there is not a spirit of adoption within and therefore he cannot pour it out.

Vehemence and crying in prayer are both necessary and natural. Do we feel the need that we are expressing? Hunger and extreme necessity cannot afford to be modest or understated.

An arrow drawn with full strength has a speedier flight; therefore the prayers of the saints are expressed by crying in Scripture. Christ prayed with strong crying or war-shouts and tears. The cry adds wings to the prayer. It is effectual – ‘this poor man cried, and the Lord heard and saved him from all his fears’. Vehement prayer is importunate”.

In James 5:16 it is fervent as well as effectual, and this word fervent, as Rutherford explains, literally points to “prayer possessed with fervour of spirit”.

Fervent, vehement prayer has a holy violence. It is called “wrestling, as Jacob by prayer wrestled with God. Now, in wrestling, the whole man is employed and all his strength, all the bones, nerves, legs and arms of the soul are set to work in praying.” Jacob had a princely power over the Angel and prevailed; “he wept and made supplication unto Him” (Hosea 12:4). Do you and I know anything of this kind of prayer? Are we content to go on with prayers that make no real requests or demands of God? And do we expect such prayers to be effectual? To expect a harvest without sowing or ploughing is impossible.

Rutherford had definite, clear and high views of God’s sovereignty. He did not think of holy violence in prayer as changing God’s mind. He knew that “wrestlings, prayings, complaining, gracious missing, cannot earn the visits from on high, nor fetch down showers upon the desert”. Prayer is the watchtower into which we enter like Habakkuk during adversities in providence (Habakkuk 2:1 and 3). Here we ask the meaning of Providence and seek to submit to His secret will.  As Rutherford wrote to one correspondent: “I hope that you have been asking what the Lord means, and what further may be His will, in reference to your return”.

Rutherford outlines various ways in which there is a heavenly violence in fervent prayer.

Prayer binds God that He cannot depart. It lays chains on His hands and builds a wall or a hedge of thorns in His way that He cannot destroy His people (Isaiah 64:7; Ezekiel 22:30). If a Moses or a Samuel should intercede by prayer that the Lord would spare the land, his prayer should be a hedge or a wall to stand in the way of justice to hinder the Lord to destroy His people.

Prayer is a heavenly violence to God expressed in various powerful expressions; as,

(1) The faithful watchmen pray and cry to God so hard that they give the Lord no rest, no silence, till He establish Jerusalem (Isaiah 62:6-7).

(3) Jacob by prayer wrestled with the Lord; and the Lord, as if He had been straitened, says, “Send me away, dismiss me. And Jacob said, I will not dismiss thee, till thou bless me:” (Genesis 32). This is well expounded by Hosea 12:4. Jacob had a princely power over the Angel, and prevailed, he wept, and made supplication to him. [He] is a Prince Which may note either a princedom in prayer over God, which is the true reason of the name Israel; or, as others think, he stood right up. His prayer did not bow nor was broken when a temptation lay on him as heavy as a mill-stone. Even when the Lord said He would depart from him, yet he prevailed under that weight. So, (Exodus 32:10) when Moses was praying for the people, the Lord said to Moses, “Let me alone that I may destroy them.”

…prayer is a prince, and a mighty, wrestling, prevailing king, that hath strong bones, and strong arms, to be victorious with God. We know the parable of the widow, (Luke 18) who by importunity obtained of the unjust judge that he should avenge her of her adversary. The scope of that parable is that prayer without fainting puts such a labour and trouble on God that He must hear and answer the desires of His children. Thus, the Lord resembles Himself to a master of a family gone to bed with his children, who yet being wearied by the knocking of his neighbour, cannot choose but rise in the night, and lend him bread to strangers come to his house.

Such prayer prevails; it is effectual. The importunate widow obtained her request and the master of a family will grant the request of his neighbour by reason of his continual knocking (Luke 18:1-8; 11:8). Will God not hear His elect who cry unto Him day and night (Luke 18:7)?

Hence, praying in the Word is expressed by knocking, where the strength of the arm is required; instant praying is resembled by the two most masterful elements – fire and water. It is resembled by fire that cannot be kept under (Psalm 39:3)…”while I was musing the fire burned”. The fire flamed out in praying (verse 4), “Lord make me to know mine end, and the measure of my days, what it is”. It is resembled by water, hence that frequent expression, “to pour out the soul before the Lord”. If the mouth of a vessel full of water be turned up and opened, the water cannot but come out, just as the floods cannot but flow.

We find it discouraging when we compare our own prayers against the fervour that Rutherford commends. Yet he uses this theme of heavenly violence to encourage. Some are discouraged; they do not have the bodily strength or other means to serve Christ as they would. “But if you can pray, you set the whole wheels of Omnipotency on work, for the building of the Lord’s house.” “It was not Ahasuerus, nor the grace that Esther found in the eyes of the king, that saved the whole church of the Jews from destruction, but the prayers of Esther and her maids. It is true, an angel brought Peter out of prison, (Acts 12) but what stirred that wheel in heaven? Here’s the cause, “Prayer was made without ceasing to God for Peter, by the church” (Acts 12:5)”.

Do not despise earnest and vehement wrestling, and fervent, persevering and patient prayer. “Prayer,” says Rutherford, “can put a reeling and tottering on king and court; pope, prelate and Babylon: we are to pray the king of the bottomless pit, the man of sin, the graven images of apostate Rome, out of the world”.

Everyone who has the spirit of adoption, though poor and rejected of men, by prayer has powerful influence on all the nations of the earth, on all Europe, on the ends of the earth, on the hearts of the Jews, on Turks and Indians. Prayer can reach as far as omnipotency, accompanied by the wise decree of our Lord. And the poorest girl or maid that can pray lends a strong lift to heighten the footstool of Christ’s royal throne. Children and poor maids, by prayer, may put the crown on Christ’s head, and hold up His throne, and may store and increase heaven by praying, “Thy kingdom come,” and enlarge hell, and fill the pits with the dead bodies of Christ’s enemies; and may, by prayer, bind kings in fetters, chain up and confine devils, subdue kingdoms.

This is the spirit of prayer that animated those who prayed for the Second Reformation to come in Scotland as a spiritual revival (read more about Scotland’s Greatest Revival). How does it compare to prayer as we know it? As Thomas Watson put it: our prayers do not need eloquence but violence. 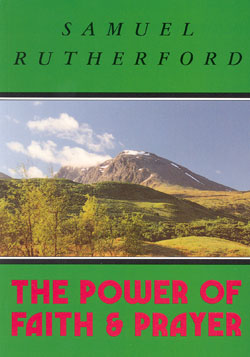 The quotations above have been extracted and updated from The Trial and Triumph of Faith and The Power of Faith and Prayer. The latter has just been issued in kindle format but is also available in paperback here (or for those in North America here).

In this book of sermons, Rutherford expounds Matthew 9:27-31. He shows the faith and prayer of the two blind men that follow Christ crying for help.

PURCHASE HERE
PURCHASE USA
← What is Political Sovereignty? How to Have Inward Calm During Outward Trouble →