What is Conscience?
Samuel Rutherford
Samuel Rutherford (c. 1600 – 1661) was one of the foremost Scottish theologians and apologists for Presbyterianism in the seventeenth century, playing a major role in formulating the Westminster Standards at the Westminster Assembly. He is best known for his many devotional letters and Lex, Rex–his seminal work on political sovereignty.
8 Jul, 2016

It crops up in discussion about the decision to go to war in Iraq. You can hear of it in relation to voting for US presidential candidates. Conscience was also in the headlines announcing the death of holocaust survivor Elie Wiesel. He has been hailed as “the conscience of the world”. In a culture without moral absolutes, conscience still has surprising currency. But what is conscience? Why does it vary so much?

Samuel Rutherford wrote a great deal about conscience. He notes that the word for conscience is used thirty-two times in the New Testament. Literally in Greek it means “knowledge with a witness”. God knows our ways and thoughts perfectly but “conscience is an under-witness and an observer with God, but a dim and blind beholder in comparison of God”.

It is a type of knowledge that is focussed on someone’s “actions, words, thoughts, the condition or state he is in, in Christ, or not in Christ”. It makes us pass judgement on ourselves: “our state and condition” all our “actions, inclinations, thoughts, and words”. Rutherford says that it is the most important faculty in the soul and the highest form of understanding.

There is more of reason and sound knowledge in the conscience than in the whole understanding soul. It is a crystal globe of reason, the beam, the sun, the candle of the soul. For to know God and the creatures in our relative obligation to God in Christ is the role, the blossom, the flower of knowledge (Job 17:3). To  see God and His beauty expressed in Christ, and the comeliness and incomparable glory of His amiable and lovely essence as held forth to us in Christ, is the highest reach of the conscience.

The Source of Conscience

Conscience comes from God and is accountable to God. “We are to stand in awe of conscience”. We can measure “how much goodness and true fear of God” someone has in so far as he respects “conscience  within him”.

Conscience is something of God, a domestic little God, a keeper sent from heaven, a divine piece which is all eye, all feeling, and has the Word with it

It is to be honoured as an ambassador from God. Honour shown to an ambassadors manifests honour to those that have sent him.

The Operation of Conscience

Yet conscience must be rightly informed by God’s Word or it cannot perform its proper function. Otherwise it is as much use as a guard dog that is blind, deaf, dumb and toothless.

A conscience void of knowledge is void of goodness; silence and dumbness is not peace. An innocent toothless conscience that cannot see, hear or speak, cannot bark, far less can it bite before it has teeth.

Conscience either excuses or accuses as the conscience is right or wrong. It approves or condemns. When it approves there is joy, comfort, faith and hope. But when it condemns there is shame, grief, fear, despair, anger and vexation.

The Best Type of Conscience

some conscience…is made of glass and is easily broken, and some of iron and brass, lay hell on it, let Christ say to Judas in his face, he shall betray his master and he has a devil, yet his conscience does not crow before daylight to waken him.

The Fragility of Conscience

Rutherford describes conscience in many memorable ways. It may be like a delicate glass object that is easily broken. Alternatively, it may be like a boat that has a leak below the water-line that is difficult to identify and mend. Perhaps they do not realise that the water on the bottom of their ship is from a leak rather than the spray. In one of his letters he gives the following caution:

keep the conscience whole without a crack! If there be a hole in it, so that it take in water at a leak, it will with difficulty mend again. It is a dainty, delicate creature, and a rare piece of the workmanship of your Maker; and therefore deal gently with it, and keep it entire

The Key Teaching on Conscience

The quotations above come from Rutherford’s book A Free Disputation on Liberty of Conscience which has never been reprinted. His teaching on conscience is well summarised in the Catechism that he composed for his congregation. He outlines the following questions and answers.

What is the principal part of the soul?

What is the conscience?

What are the lights that direct the conscience?

The law of nature in man’s heart and the light of the Word are the two candles that God has lit to let it see to walk.

What are the proper works of conscience?

What are the works of conscience upon the law?

What of the erring conscience?

It still binds so that he sins who does anything against conscience (even if conscience is in error). This is because conscience is God’s depute. Therefore, just as he who assaults a private man believing him to be the king is esteemed to be an attacker of the king, he who sins against an erring conscience does sin in practice if not in principle. [This is a rather complex point but it means that if our conscience tells us something is wrong even if it is in fact not wrong it is sinful for us (if we believe that what we are doing is wrong) to deliberately disobey the voice of conscience and dishonour it. This is supported by “whatsoever is not of faith is sin” (Romans 14:23). Whatever is done when we doubt whether it is right is sin. Lawful things may be done unlawfully.]

What are the works of conscience as a witness of our deeds?

What are the faults of conscience?

What are the works of conscience in so far as it applies the law to our actions?

What are the faults of the conscience as a judge?

Often it makes men think the way to hell is the right way (Proverbs  21:2; Psalm 1:21; Zechariah 11:5) and turns into a dumb dog that does not bark at the coming of the thief.

What causes those faults in conscience?

Ignorance of God (Psalm 14:1) and the loud crying of affections sent out to woo a wife to Satan make a strange sound in the ears and create mist in the eyes of conscience.

How many sorts of consciences are there?

Many and various: good or evil, weak or strong, dead or living, etc.

What is the practical benefit of teaching about conscience?

Seeing we carry our judge with us in our breast which we take either to heaven or hell with us and cannot put on or off our conscience as we do our garments, we should fear to sin before our conscience and reverence ourself. 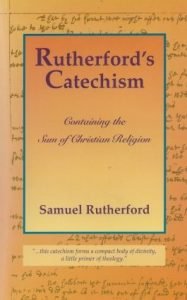 Rutherford’s Catechism contains many pithy and colourful expressions and illustrations. It covers additional material at greater length than many other catechisms in particular the section on temptations and on the person and offices of Christ which extends to over 12 pages. It needs some patience and reflection but is highly recommended.

Rutherford’s Catechism can be purchased from James Dickson Books. It is £4.95 but there is a special discount of 10% available to readers of this blog post using the coupon code RST16. (enter the code after adding the book to the cart).

Purchase here
← How to Get Hold of Covenanter Bible Commentaries Where Can Your Soul Thirst Be Satisfied? →