6 Reasons Why You Must Constantly War Against Sin
Andrew Gray
Andrew Gray (1633-1653) was a gifted young preacher who died after a ministry of only 27 months in Glasgow. His sermons were marked by deep spiritual experience. It was said of him, "...never in the history of our country did a man of his years make so deep a mark."
17 Feb, 2017

​The battlefield is the worst place in the world. Constant danger, bombardment and stress take their debilitating toll on mind and body. No doubt it is impossible for those who have never been in a foxhole fully to comprehend it. Yet the Christian is in the midst of a constant spiritual battle against sin (Romans 7:23; James 4:1; 1 Peter 2:11). It is an enemy that never calls a truce. We will suffer great spiritual damage if we do not maintain constant warfare against it.

​Andrew Gray preached several sermons on spiritual warfare against sin. They are positive in showing the victory that may be obtained through Christ (Romans 7:24-25). The blessings and benefits of this warfare are included in a new free e-book called War Against Sin (download). Yet Gray says that he is “afraid that the Christians of this generation have proclaimed truce and a treaty of peace with their lusts”. “O, can such a delusion as this overtake you, that you can be an overcomer without fighting? Is your strength greater than those that have gone before you? Do you think you can accomplish this war in one day and pursue your enemies till you overtake and consume them? O when will it be that we will be daily groaning forth daily this mournful cry: ‘O wretched man that I am, who shall deliver me from this body of death'” (Romans 7:24).

What is Spiritual Warfare Against Sin?

In these words Paul breathes out a sweet desire to be delivered, not only from his actual corruption, but from his original guilt, which here he calls the body of this death.  Great multitudes of corruptions flow from the root of original sin. It has so many different and varied members and parts that they make up a body, which, unless it is resisted, will certainly occasion death. When Paul is under strong conviction of his guilt and sees himself completed he uses these words:  “O wretched man:. The word in the original signifies one wearied with troublesome and continual combat with little apparent success. This certainly implies that he was a man who was greatly and continually taken up in wrestling against his corruptions. He was endeavouring to bring them unto subjection to the obedience of Christ Jesus.

You can see the way Paul sought to overcome his lusts, he was much in prayer. The words of verse 24 are a short and sad prayer. It is like Isaiah 38:14 “O Lord, I am oppressed, undertake for me”.

It is the duty of a Christian to wrestle against their corruptions (Acts 24:16; Colossians 3:5; Ephesians 6:13 and 1 Corinthians 5:7). No doubt, if we reflected more on the nature of sin we would be more constant in this warfare. Especially if we considered that through sin precious conformity with God is lost. We must also consider the woeful effects of sin: that it works death and brings us under the curse of a living God. Failure to consider these means that Christians are greatly disabled to stand fast in liberty with which Christ has made them free and often entangle themselves again with the yoke of bondage.

1. Lack of Assurance Comes from Not Warring Constantly Against Sin

Most Christians, if were asked when they last set aside some hours to put their sins to death would not be able to give an answer. A Christian that can interrupt the work of putting sin to death for several weeks may either suspect that grace is groaning within him with the groanings of a deadly wounded man or else that he is not at begotten again to a lively hope at all. There is no discharge in this warfare. We must fight until we have one foot within that place of everlasting delight.

2. Hardness of Heart Comes from Not Warring Constantly Against Sin

This was clearly the case with David, having ceased this war he could write a letter to get godly Uriah killed. Scripture makes no mention of David’s heart smiting him for it. Those who are not putting sinful self to death make their heart die as a stone within them.

A warring Christian keeps this holy zeal within. He hates the garments spotted with the flesh. Why is there such hardness of heart among us in these days? It is because Christians are not putting sin to death much. We think we will gain heaven easily and this makes us give so little consideration to this blessed work.

3. Prevailing Sin Comes from Not Warring Constantly Against Sin

Christians that do not war constantly against sin ordinarily have their indwelling lusts reigning most. Sin will gather more strength when we neglect to put it to death for a single day than we can gain to prevail over it through wrestling with it many days. Sin has a subtle dexterity. It can regroup with ease within a few hours. If you are not constant in this warfare you will not sing many songs of triumph over your lusts. A triumpher in the fight must be constant. How long is it since you set up an Eben-ezer to God as  a trophy and monument of your victory? We think the Christians of this generation have the fewest and least trophies of their victory in the way to heaven as ever any that went before them.

4. Lack of Hope Comes from Not Warring Constantly Against Sin

A Christian who neglects to war constantly against sin fights a doubtful war. They have not determined whether the fight will go in their favour or not. In 1 Timothy 4:8, Paul speaks of fighting in an agony (as the word implies) persuading himself that he will have that crown of righteousness which is the reward of a conquering Christian. I do not know what will afford a Christian greater peace and comfort than to believe that he will put all enemies under his feet and make them his footstool.

5. Doubts in Death Come from Not Warring Constantly Against Sin

Do you know why some Christians die with so little assurance of faith? They have not been much in  putting sin to death. What comfort Paul had , when he said, “I have fought the good fight of faith”. I doubt if Paul ever sang a song of praise in a higher key than when he sang that song (2 Timothy 4:8). Paul’s heart was half-transported, when reflected on the fact that all his lusts were dying and killed at his feet.

6. Withered Grace Comes from Not Warring Constantly Against Sin

A Christian who neglects constant war against sin is withered in other graces and in exercising their gifts. This is one of the sorest afflictions that can befall a Christian. 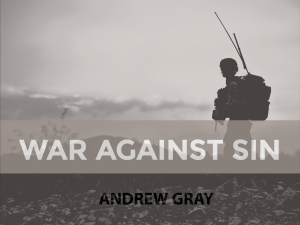 Few other things are more vital for spiritual life and health than putting sin to death. It is as stark a choice as John Owen emphasised: “Be killing sin, or sin will be killing you”.

This free e-book called War Against Sin (PDF) shows the benefits of putting sin to death. Gray stresses how closely it accompanies vigorous spiritual growth, grace and assurance. We cannot call a truce in this warfare.