The Glorious Marriage Day of the Kingdom With God
Covenanters
The Covenanters were a group of faithful ministers and Christians in Scotland who worked to uphold the principles of the National Covenant of 1638 and Solemn League and Covenant of 1643 in order to establish and defend Presbyterianism against the imposition of Episcopacy by the state. They suffered severe persecution through imprisonment, fines and execution rather than abandon their principles.
28 Feb, 2017

This, for Archibald Johnston, was the best way of describing the 28 February 1638 – the day that the National Covenant was renewed. Ultimately, it would be signed by the whole nation. Politically, it was Europe’s first revolution. Ecclesiastically, it was Scotland’s Second Reformation. Johnston, a lawyer, was one of two men who were responsible for drawing up the Covenant. In the context of protests against the King’s Prayer Book, the Covenant enabled those protesting to unite together.

The Covenant called for adherence to the official doctrines confessed by the nation as confirmed by Acts of Parliament. It rejected “innovations” in religion and pledged defence of “the true worship of God”. The protesters re-subscribed the 1596 Confession of Faith. Although they professed loyalty to the king and denied that they were guilty of treason, Charles I condemned them, threatening arrest. Yet within days it had been signed by the people of Edinburgh and copies were then sent to the rest of the country for other people to sign in their thousands. Within weeks it had been subscribed by the Lowlands of Scotland, including almost all the nobles.

It was a moving experience as the historian William Hetherington describes:

The intense emotions of many Scot Presbyterians that day became irrepressible. Some wept aloud; some burst into a shout of exultation; some, after their names, added the words unto death

Johnston recorded the following in his diary:

Wednesday, 28 February 1638, that glorious marriage day of the kingdom with God…The noblemen having appointed the body of the gentry to meet at two in the Greyfriars Kirk to hear copies of it read and to answer objections, I proposed and resolved to have the principal ready in parchment…[that]…it might be presently subscribed…after a divine prayer most fit for the time and present purpose made by Mr Alexander Henderson, the Covenant was subscribed first by the noblemen and barons all that night till 8 at night. On Thursday morning I had…four principal copies in parchment. At nine it was subscribed by all the ministry; at two hours by the burghs. (Diary of Sir Archibald Johnston, Lord Wariston). 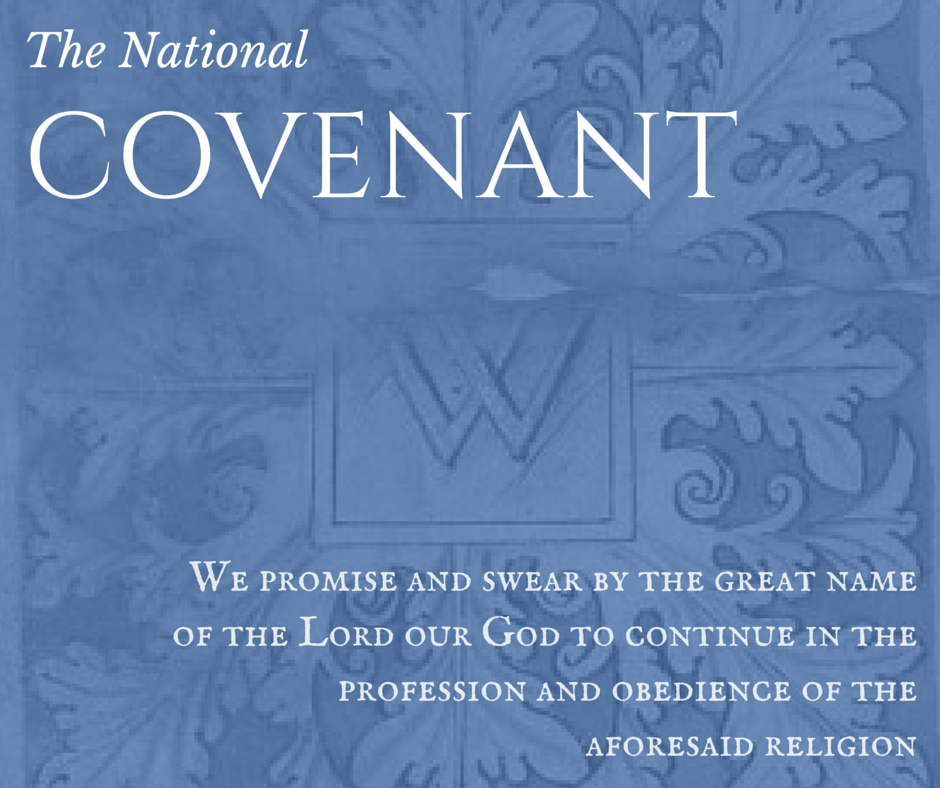 The National Covenant begins as follows with a moving expression of faith and personal commitment. Scripture, the gospel and Reformed doctrine are resolutely defended:

We all, and every one of us underwritten, do protest, that after long and due examination of our own consciences in matters of true and false religion, we are now thoroughly resolved of the truth, by the word and spirit of God; and therefore we believe with our hearts, confess with our mouths, subscribe with our hands, and constantly affirm before God and the whole world, that this only is the true Christian faith and religion, pleasing God, and bringing salvation to man, which now is by the mercy of God revealed to the world by the preaching of the blessed evangel, and received, believed, and defended by many and sundry notable kirks and realms…

The concluding words display courage and a commitment to personal reformation as key to the whole endeavour:

Neither do we fear the foul aspersions of rebellion, combination or what else our adversaries from their craft and malice would put upon us, seeing what we do is so well warranted, and ariseth from an unfeigned desire to maintain the true worship of God, the majesty of our King, and the peace of the kingdom, for the common happiness of ourselves and posterity.

And because we cannot look for a blessing from God upon our proceedings, except with our profession and subscription, we join such a life and conversation as beseemeth Christians who have renewed their covenant with God; we therefore faithfully promise, for ourselves, our followers, and all other under us, both in public, in our particular families and personal carriage, to endeavour to keep ourselves within the bounds of Christian liberty, and to be good examples to others of all godliness, soberness and righteousness, and of every duty we owe to God and man; and that this our union and conjunction may be observed without violation we call the living God, the searcher of our hearts to witness, who knoweth this to be our sincere desire and unfeigned resolution, as we shall answer to Jesus Christ in the great day, and under the pain of God’s everlasting wrath, and of infamy, and of loss of all honour and respect in this world; most humbly beseeching the Lord to strengthen us by His Holy Spirit for this end, and to bless our desires and proceedings with a happy success, that religion and righteousness may flourish in the land, to the glory of God, the honour of our King, and peace and comfort of us all.