What is Worship?
James Durham
James Durham (1622-1658) was minister in Glasgow for only eleven years but left a considerable number of writings. One of the co-authors of 'The Sum of Saving Knowledge', he is best known for writing what is still regarded as the classic Reformed work on church unity, division and schism, 'A Treatise Concerning Scandal' as well as a highly sought after commentary on the Book of Revelation.
13 Apr, 2017

It is strange that we may engage in something so often and yet not stop to ask what it is. We could ask many different individuals to define worship and we would get a variety of responses. Some people think of praise as “a time of worship”. Others might add prayer together with that. Another response might stress that it is an attitude of heart more than specific activities. Then there are those who want to say that all of life is worship. What really matters, however, is not the range of personal opinion but how God defines it in His Word.

The English word worship derives from “worth-ship” i.e. ascribing worth. In Scripture, the words for worship often indicate specific acts such as kneeling, falling down, doing reverence, paying homage (literally kissing towards). Sometimes they indicate fear, other times service and humbling ourselves. It is both attitude and action. There are also activities that are distinct from daily life e.g. a distinct meal (the Lord’s Supper and a distinct day (the Lord’s Day). It includes specific acts of public worship which a congregation assembles to offer. These are regulated in a different way than everyday activities at home (1 Corinthians 14:33-35; 1 Corinthians 11:20, 33-34).

As an overall definition of worship it would be hard to improve on Robert Shaw’s statement. It is found in his exposition of the Westminster Confession of Faith (chapter 21). It encompasses the various dimensions that we have mentioned.

Religious worship consists in that homage and honour which we give to God, as a being of infinite perfection; whereby we profess our subjection to, and confidence in him, as our chief good and only happiness. It may be viewed as either internal or external; the former consisting in that inward homage which we owe to God, such as loving, believing, fearing, trusting in him, and other elicit acts of the mind; the latter consisting in the outward expression of that homage, by the observance of his instituted ordinances.

It is worth pausing with slow reflection to absorb the comprehensive meaning of this definition. Worship involves acknowledging our subjection to God as not only a greater but the greatest being. He is the highest possible object of our inward and outward expressions. Our hearts must be engaged to Him and taken up with Him as well as our mind, soul and strength. The only true outward acts of worship are those He Himself has commanded. It is not for us to define what is acceptable to God or magnifies Him. Scripture speaks of any other worship as “will-worship” (Colossians 2:23). Even if it is offered to God it is only worship of our own will because we have chosen it not God.

James Durham also takes up the challenge of defining worship in his exposition of the Fourth Commandment.

By worship is understood some tribute paid by the reasonable creature to God as the great and Sovereign Lord Creator.

This mentions the same homage and ascribing of worth and greatness to God in humble reverence and dependence. Durham does not leave it there, he then makes a distinction between direct and indirect acts of worship. There is worship “immediately and directly paid and performed to Him, such as prayer and praise”. There are also indirect acts of worship which are done “for Him and at His command and for His honour”. These include “preaching, hearing and receiving the sacraments”. These are also worship when rightly engaged in.

Durham stresses the moral requirement of worship. Worship strictly defined is something required by the first table of the moral law i.e. the first four commandments. In these worship is commanded “for the honour of God and not for our own or another’s external profit”. The benefit of others comes into the second table of the moral law. Commandments 5-10 teach us how to love our neighbour as ourselves. But this cannot be strictly called worship, much less direct and immediate worship. Thus, teaching others the duties of piety may be worship when teaching the duties of any other ordinary calling is not. In this way Durham shows that there are acts of worship to God distinct from the rest of life. All of life is to be lived to the glory of God and in submission to His Word but this does not make it impossible to distinguish it from stated worship. In an essay included in his commentary on Revelation Durham gives some further principles that are basic to the understanding of worship.

1. There is Only One Object of Divine Worship – God

No one else but God has the infinite attributes and excellencies which are requisite in the object of divine worship. These include omniscience, omnipotence, infiniteness, supreme majesty, glory etc. Adorability results from these – this is an essential attribute of the majesty of God just as immutability and eternity. He is adorable, because He is infinite, immense, omniscient etc. Worship and adorability cannot therefore be given to or shared with any other any more than these unique attributes can be given or shared. Yet none can be worshipped who is not adorable.

2. There is Only One Kind of Divine Worship – God’s

There is only one kind of divine worship which befits this infinite majesty of God. It is only that which is required in the first table of the moral law. That is the only lawful and acceptable worship given to this glorious excellent God. This follows from the first point. If there is only one object there can only be one manner of worship. Therefore, in Scripture, worshipping God is always opposed both to worshipping any other and to allowing any worship which is not lawful and acceptable to God (e.g. Revelation 19:10 and 22:9).

3. There is Only One Object of Divine Worship – the Triune God

(a) Although the three Persons are really distinct each from other; yet, none of them is really distinct from the essence of the Godhead. Therefore, the Father is the same object of Worship as the Son, because they are the same God.

(b) Although both the Father and the Son are infinite there are not two infinitenesses but the same infiniteness and immenseness, which belongs to both the Fathers and the Son. These are essential to their being and so are common to all the Persons of the Godhead, Although their personal properties are distinct yet their essential attributes are in common. They are not distinct objects but one and the same  object. Worship has regard to their essential attribute and the Godhead, which is common to all three Persons. It is the deity (which is One) which is the formal object of worship. Although sometimes these three Persons are named together this does not mean they are distinct Objects. Rather it shows who this one object God is, i.e. the Father, Son and Spirit, three Persons of the same one indivisible Godhead. God is “one Lord” (Deuteronomy 6:4).

Durham goes on to stress the practical implications of this.

1. The mind of the worshipper is not to be distracted in seeking to comprehend or order, in his thoughts, three distinct Persons as distinct objects of worship but rather to conceive reverently of one infinite God, who is three Persons.

2. Whatever person is named, we are not to think that the others are less worshipped. Rather in one act we worships one God and thus the Father, Son and Spirit.

3. Naming one Person after having named another (e.g. the Father first and afterwards the Son) does not change the object of worship, as if we were praying to another now – it is still the same One God.

4. It is safest not to change between naming the different Persons of the Godhead in prayer because our imaginations are ready to adopt such divided conceptions. This is particularly the case when it is in the hearing of others who may be prone to such thoughts even though we have none. This seems to be the ordinary practice in Scripture.

Many have their own ideas of how we should address God and what constitutes worship but we must be governed by Scripture in this. Only what God commands in worship is permitted. This ought to be obvious from the greatness of God and the importance of worship. Something so crucial is not something to be left to changeable human whims and imaginations.

We must be taken up with God in worship not with ourselves or others. Worship must be God-centred or it is not worship. This applies not just to whom we worship but how we worship. If the way in which we worship God is not what God has commanded and required then we are not truly submitting to God and doing true homage to Him. It is illogical that people can ask how we should worship God but then answer that question by asking what is most attractive or comfortable to ourselves or others. Have we forgotten who we are worshipping and what worship is?

One of our leaflets explores this question. 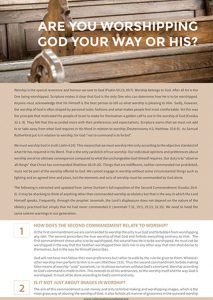 Are You Worshipping God Your Way or His?

How we worship God is not a matter of personal opinion and taste.  It is a moral issue because it is directly related to the Moral law, as expressed in the Ten Commandments.  This leaflet presents an updated extract from James Durham’s full exposition of the Second Commandment (Exodus 20:4- 6).

If you are wondering how this commandment relates to worship, the leaflet gives an explanation. It is a concise summary of some clear truths on a crucial subject.