The Church is Still Christ’s Glory
James Renwick
James Renwick (1662 – 1688) was the last of the Covenanter field preachers to be put to death. He was just twenty six when he was executed in the Grassmarket.
5 May, 2017

​The Church is often given scant regard in society at large. Changing values and trends push the church well into the shadows. Statistics like those in the recent Scottish Church Census are not lacking to underline how secularised things have become. It is easy to see the Church as weak when viewed outwardly. Again, however, we must see the Church from Christ’s perspective rather than look through the blurred lens of unbelief.

Christ’s true Church in Scotland seemed perhaps even more weak and despised in the times of James Renwick than it does now.  Renwick was ordained as a minister in Holland in 1683, before coming back to Scotland to begin preaching.  The flocks to which Renwick returned were in his own words, “a poor, wasted, wounded, afflicted, bleeding, misrepresented, and reproached remnant and handful of suffering people”. They had no congregations and no buildings in which to worship. Conventicles or illegal worship services in the fields and hills were held at the risk of their lives, liberty and livelihoods.

Renwick preached intensively and travelled incessantly across the country.  For his safety he had to take shelter in moors and caves and travel under cover of darkness. It broke his health – he said that  “Excessive travel, night wanderings, unseasonable sleep and diet, and frequent preaching in all seasons of weather, especially in the night, have so debilitated me that I am often incapable for any work”.

On one of these occasions Renwick opened his remarks with the following moving observation. “The Lord, by a special providence, has brought us together, not knowing if ever we shall have the like occasion to meet together again”. It seems likely from some of what he said that the service was at night in order to be better concealed under cover of darkness. The sermon he proceeded to preach was from Zechariah 2:8. His theme was that the Church is Christ’s glory (see also Isaiah 4:5).

Christ has the Church for His special and unique kingdom where he delights to manifest His glory. She is His declarative glory, His purchase and the price of His precious blood. She is His society where He desires to dwell. O who can set forth the love of Christ to His Church? She is beautiful through His comeliness.

The Church is Christ’s glory because He has glorified Himself in the great work of His Church’s redemption.  He manifests the glory of His power in His Church in the conversion of His elect. More of God’s power is to be seen in the conversion of a soul to Himself than in the creation of heaven and earth. God could and did create the heaven and the earth without the merit or mediation of His Son Jesus Christ. Heaven and earth are God’s works not as Redeemer but as Creator. It is true indeed, that, in the work of creation and all God’s works all three persons of the ever blessed Godhead concurred together. But the work of creation is not attributed to Jesus Christ as Redeemer.

The second creation (the soul’s conversion to God) deals with the corrupt nature in man which strongly opposes and resists the work of grace. There is therefore greater glory in beginning and carrying on the work of grace against this strong opposition and resistance than in creating heaven and earth where there was no such resistance.

What shall I say of the glory which Christ manifests in the work of conversion? It surpasses the rhetoric of angels to express it.

The church is Christ’s glory, because He has dignified and beautified her with his ordinances. Psalm 147:19-20 mentions the ordinances of God bestowed upon His church. This shows the glory of God and the beauty, dignity, and privileges of His Church. God’s ordinances are part of that by which He makes Himself known. Since He beautifies and dignifies His church with His ordinances, therefore His church is called Christ’s glory.

The Church is called Christ’s glory because she carries His image (1 John 3:3). The godly man strives to be holy as Christ is holy. O what glory it is to be like Jesus Christ. This special privilege of His children (Psalm 45:13; Song 4:9). How glorious Christ’s image makes His Church. He is the express image of His Father and the brightness of that glory (Hebrews 1:3). He sets His image on the true Church, those who are real members of His spiritual body.

See what He says concerning the beauty of His Church in Song 6:4-5. The Church is called Christ’s glory because she bears His image. You must be sure that you have Christ’s image on you, if you would be amongst those on whom He puts His name. For the mere profession of religion will not give you a right to that name “His glory” but rather truly bearing His image.

5.Glorified by Christ’s Acts for Her

The time when His Church and people are low and in trouble is when He most manifests His glory in doing for them as Israel saw in the wilderness. Thus, Israel’s marching through the wilderness is said to be God’s marching (Psalm 68:7).

The Church is called Christ’s glory because she sets forth His glory by praise (Psalm 50:23). The Christian is greatly taken up with declaring God to be a glorious God. The Christian adorns his profession by gospel living. He is takes great delight in praising Him and pursuing a life of thankfulness to Him as well as praying to Him.

A Christian must take up much of his time in praying to and praising God so that He may be glorified. Slothfulness is a great dishonour to the name of God but diligence exalts the name of God; it glorifies His name. “Worthy is the Lamb that was slain, to receive power, and riches, and wisdom, and strength and honour, and glory, and blessing” is what they are crying this night above the clouds and stars (Revelation 5:11-12). All who expect to have their life through eternity should begin their work now, in glorifying and praising God.

7. Glorified with Christ’s Working for His Name’s Sake

The Church is called Christ’s glory because it is only for His name’s glory that He does all things for her (Ezekiel 36:22; Psalm 79:19). Christ’s name sake is the only moving argument that the Church should make use of. 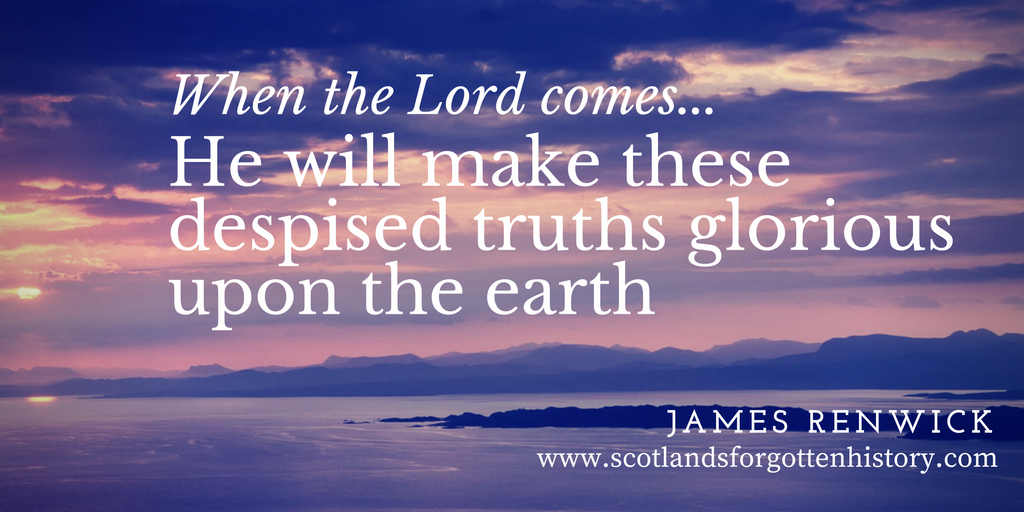 “As to the remnant I leave, I have committed them to God. Tell them from me not to weary, nor be discouraged in maintaining the testimony. Let them not quit nor forego one of these despised truths. Keep your ground, and the Lord will provide you teachers and ministers, and when He comes, He will make these despised truths glorious upon the earth…’Lord, into Thy hands I commit my spirit, for Thou hast redeemed me, Lord God of truth'”

(His very last words before being executed, 17 February 1688)

← Is the Church Going to Drown? Can Unanswered Prayer be a Blessing? →