Conscience is Fragile: Handle with Care
Samuel Rutherford
Samuel Rutherford (c. 1600 – 1661) was one of the foremost Scottish theologians and apologists for Presbyterianism in the seventeenth century, playing a major role in formulating the Westminster Standards at the Westminster Assembly. He is best known for his many devotional letters and Lex, Rex–his seminal work on political sovereignty.
7 Jul, 2017

The human mind is fragile as well as powerful and complex. The human spirit can be resilient but may also be frail in the face of countless intricate emotions, memories, doubts and fears. Conscience is an especially delicate part of who we are. God has given it to us as a witness to His righteous requirements. Sin has disordered it but further damages it. Our moral compass is easily warped by sin’s magnetic force. The Bible tells us that conscience can be defiled, wounded and seared. Through handling conscience carelessly we can do untold damage to ourselves. Grace, however, can heal and restore.

Samuel Rutherford adores the great wisdom of God in creating the world which is best seen in creating so rare a thing as the soul. He says that the most intricate part of the soul is the conscience which he describes as “that lump of divinity” because it is “like a beam of God”. “Conscience is the gold of the man”.

Conscience is placed in the soul as God’s own deputy and God’s notary [official recorder]. There is nothing passes in our life, good or evil, which conscience notes not down with an indelible character—conscience writes all men’s iniquities as the sin of Judah was written (Jeremiah 17:1) with a pen of iron and with the point of a diamond. Conscience…keeps a daily diary of everything that occurs in the whole course of our life, and then conscience is as a thousand witnesses: it’s an eye-witness and a pen-witness, bringing testimony from the authentic registers and records of the court of conscience.

Samuel Rutherford describes conscience in many memorable ways. It may be like a delicate glass object that is easily broken. Alternatively, it may be like a boat that has a leak below the water-line that is difficult to identify and mend. Perhaps they do not realise that the water on the bottom of their ship is from a leak rather than the spray. In one of his letters he gives the following caution:

keep the conscience whole without a crack! If there be a hole in it, so that it take in water at a leak, it will with difficulty mend again. It is a dainty, delicate creature, and a rare piece of the workmanship of your Maker; and therefore deal gently with it, and keep it entire

He speaks of a pure conscience as one that is good having been purged and washed (Hebrews 10:2). The great spot of guiltiness has been taken away, and it is clear, pure, terse, like a crystal glass (1 Timothy 1:5). It is also good and honest, or beautiful and fair. A good conscience is a comely, resplendent, lovely thing (Hebrews 13:18). Conscience when it is working properly is sensitive and easily broken. If we ignore it we can become unbreakably hardened.

some conscience…is made of glass and is easily broken, and some of iron and brass, lay hell on it, let Christ say to Judas in his face, he shall betray his master and he has a devil, yet his conscience does not crow before daylight to waken him.

The conscience is a tender thing, says Rutherford and it can either be our best friend or our worst enemy.   Who can bear a wounded spirit (Proverbs 18:4)?

Blessed is the man who follows the injunctions, dictates, prohibitions and determinations of a good and right-informed conscience, and hearkens to all its incitements. Oh that every man would remember how dangerous a thing it is to resist the checks of conscience, for in so doing we fight not only against our own light, but against the light of the Holy Spirit!

Rutherford wrote an extended account of one man whose conscience had been hardened but later became inflamed with guilt. Aged only 35, John Gordon must now come to terms with a terminal illness and a burden of guilt. This is the powerful account of a man with a troubled conscience being counselled in the face of death. In these conversations, Samuel Rutherford lovingly and faithfully administers the conviction and comfort the young nobleman needs. True peace and assurance are carefully distinguished from false hope. It is valuable for all of us but especially those nearing eternity and those who seek to give them spiritual help.

This book has now been reprinted as Conversations with a Dying Man. It is highly valuable and recommended. This was a man who wanted to have the best of this world but had to compromise in order to get worldly status. His backslidings became an unbearable burden on his conscience in the face of death, however.

John Gordon, Viscount of Kenmure speaks of “the fearful wrestlings of my conscience…when I seemed to be glad and joyful before men”. He had pretended to be ill in order to avoid standing out clearly in the interests of Christ’s cause. This would have involved opposing the king in Parliament. He later acknowledge with the most bitter sorrow, “I deserted the Parliament for fear of incurring the indignation of my prince, and the loss of further honour, which I certainly expected”. He confessed:

I have found the weight of the Lord’s hand upon me for not giving testimony for the Lord my God, when I had occasion once in my life at the last parliament. For this foul fault, how fierce have I felt the wrath of the Lord my God! My soul hath raged and roared: I have been ripped up [grieved] to the heart…Would to God I had such an occasion again to testify my love to the Lord! For all the earth should I not do as I have done, tell them…Woe, woe be to honours or any thing else bought with the loss of peace of conscience and God’s favour! 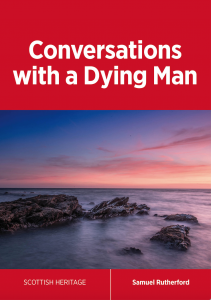 Rutherford must have many conversations with him in order to bring him to true repentance. Sometimes he must rebuke him as well as administer comfort. His faithful pastoral care brings the conscience of John Gordon from despair to joy unspeakable. He died “sweetly and holily, and his end was peace”. Rutherford concludes that the “way of impiety never had, nor shall have, good success…there is no delight [comparable to] the delight of a good conscience: let that bird in the breast be always kept singing”.

Rutherford believed it was necessary to record such “heavy pangs of conscience and torment of mind” to show what can happen when we go against conscience.  We can learn much and in particular “be warned by his example” not to forsake God’s cause when we have opportunity. We are especially “never to wrong their conscience, which is a tender piece [thing], and must not be touched”.

We take nothing to the grave with us, but a good or evil conscience.

← Do We Love Jesus But Not the Church? Your Role in Preventing Ministry Failure →