Loving Christ Means Hating Sin
James Durham
James Durham (1622-1658) was minister in Glasgow for only eleven years but left a considerable number of writings. One of the co-authors of 'The Sum of Saving Knowledge', he is best known for writing what is still regarded as the classic Reformed work on church unity, division and schism, 'A Treatise Concerning Scandal' as well as a highly sought after commentary on the Book of Revelation.
20 Oct, 2017

It’s no difficult thing to say or type the words “I love Jesus”. Many do this in their social media profiles or posts. They inform us that they love Jesus, and many other things too. The claim seems to have no context other than this person’s idea of Christ and the terms on which they wish to love Him. It may mean respect and strong interest or even follow, worship and obey. These are words, however, that can never be casually used by those that have come to understand the full measure and wonder of being savingly united to Christ. There is in fact no greater claim. We may prove the sincerity of such assertions to Christ Himself, ourselves and others in various ways. One of the clearest is in our attitude to sin. The extent of our love to Christ may be measured by the extent of our hatred of sin.

It has often been said that the believer should no more love sin than the wife should love her husband’s murderer or the murder weapon. The sting of death is sin and believers’ sins were the sting in Christ’s death. The cross shows us what sin is and what it deserves, it also shows us Christ’s love to its greatest extent and provides the greatest reasons for loving Christ. How much do we really value Christ and His sufferings on the cross if we are casual about sin?

James Durham focussed on these themes in preaching 72 sermons on Isaiah 53. These make an extensive volume but they are a treasure trove of the essence of the gospel of Christ crucified considered from many different perspectives. In expounding Isaiah 53:4 Durham notes the undervaluing of Christ in the words “we did esteem him stricken, smitten of God and afflicted”. The sin of not loving and valuing Christ was made even worse by despising Him when His greatest love was poured out on the cross. Though Christ did this Durham says, we abused it and made it the rise of the greatest malice. There is nothing that gives sin a deeper dye than that it is against grace and condescending love, against Christ when suffering for us, and offered to us. That makes sin exceedingly sinful and abominable. It is a fearful thing to despise Christ crucified (the only remedy for sin) offered to us in the preaching of the gospel.

1. Sins Against Christ have the Greatest Guilt

This adds greatest guilt to the sins of believers. We “despised him, and esteemed him not”. It is true that, in some respects, the sins of believers are not so great as the sins of others. They are not committed so deliberately and with such full force of desire under the dominion of sin as others. Yet in another respect they are greater than the sins of others, because they are committed against special grace and love received. When the believer confiders that they have returned Christ’s love in this way it will grieve them more than anything else if they are truly sensitive.

2. Sins Against Christ Should Grieve Us Most

The believer that is most sensitive in this way is best assured of their right to Christ and His atonement. They will be most sensitive about their enmity and abominable guilt of despising and wronging Jesus Christ. The prophet Isaiah includes himself as one of those healed by Christ’s stripes. He accepts his guilt, “we despised and rejected him, we esteemed him not, we judged him smitten of God”.

If we are truly Christ’s our heart will be tender and any wrong done to Christ will affect us in a quicker and deeper way. We esteem Christ and have a holy sympathy with Him in all the concerns of His glory.  The members of the body have a fellow-feeling with the head. Suppose a man in a fit of madness was to smite and wound his head, or wrong his wife, his father or brother. When the fit of madness is over, he will be more
grieved with that wrong, than if it had been done to any other member of his body, or to other persons who either were not related or not so closely related.

There is something of this in Zechariah 12:10 “they shall look upon me whom they have pierced, and they shall mourn for him”, as for an only son. It is if he had said, the strokes they have given the head shall then be very heavy and grievous for them. In their feelings the wounds will bleed afresh. They did not think much of wounding and piercing Him in this way before. When they come to believe in Him, however, they are keenly affected by the wrongs done to Him.

The believer’s wrongs against Christ will prick their conscience most. If the wrongs have been done by others, they grieve him but if they have been done by himself, they some way faint him. Wholeness of heart, under wronging of Christ, is too great an evidence that there is little or no ground for application of his satisfaction; but it is kindly like, when wrongs done to Christ affect most.

3. Sins Against Christ Should be Our Greatest Burden

We should be burdened when convicted for sinning against the law. Yet sins against Christ and grace offered in the gospel should become the greatest burden.

4. Sins Against Christ are the Worst Thing Possible

When the man is confronted with his secret enmity against Christ and how this increases the guilt of his sins, he can never be too vile in his own eyes. He has a holy indignation at himself. Like Paul he reckons himself the chief of sinners. Even though the evil was done in ignorance, it is much greater if it has been against knowledge. Such souls heap up the ways in which their guilt is increased because of their wrongs done to Christ. They cannot get suitable expressions to condemn it sufficiently. It is a bad sign if we are easily satisfied in our convictions of guilt for sin. There are many that will not admit to any convictions for wronging Christ. See how the prophet insists on the sin of despising Christ here, in previous verses, in these and in the following words. He can no more leave aside thoughts of this, than he can leave the thoughts of Christ’s sufferings. 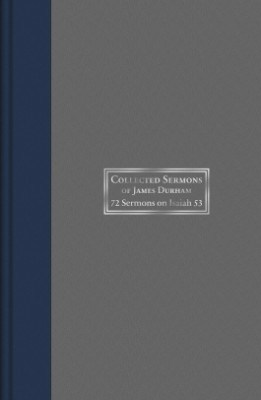 This volume of sermons has been recently republished as Collected Sermons of James Durham: Christ Crucified: or, The Marrow of the Gospel in 72 Sermons on Isaiah 53. At 840 pages, the sermons on Isaiah 53 present one of the best commentaries ever written on Christ’s person and work in redemption. Spurgeon, who inscribed his personal copy with the words “much prized,” says of these sermons, “This is marrow indeed. We need say no more: Durham is a prince among spiritual expositors”. Principal John Macleod said: “He there opens up the truth of the sacrifice and the intercession of our Lord…the duties of preachers and hearers of the gospel, together with the diversified exercises of heart and soul that gospel truth is fitted to call forth”.

Order in UK
Order in USA
← What Do Reformers Look Like? Did Luther Reject the Ten Commandments? →