He draws the answers out of the Bible using passages like Deuteronomy 17 and 1 Timothy 2:2. There are more principles than you might think in Scripture and it is necessary to handle them carefully. Ultimately civil government is from God, for His glory and limited by His law, but the power is given through the people for whose wellbeing it is to be exercised.

Rutherford’s discussions of these principles help us with a more detailed understanding of the teaching of the Westminster Confession of Faith (Chapter 23) on the matter of Civil Government. “God, the supreme Lord and King of all the world, has ordained civil magistrates, to be, under Him, over the people, for His own glory, and the public good: and, to this end, has armed them with the power of the sword, for the defence and encouragement of them that are good, and for the punishment of evil doers”. “Civil magistrates being set up by God for the ends aforesaid; subjection, in all lawful things commanded by them, ought to be yielded by us in the Lord, not only for wrath, but for conscience sake; and we ought to make supplications and prayers for kings and all that are in authority, that under them we may live a quiet and peaceable life, in all godliness and honesty.”

Romans 13 tells us that “the powers that be are ordained of God”. But does this mean that their power and authority is unlimited so that whatever they command is right simply because they command it? Rutherford denies that Scripture supports such a view which can lead to totalitarian tyranny. Instead he says that although government derives its authority from God as the ultimate source, this power is limited in two ways.

It is limited by divine law and subordinate to it. The government is not above the law. “There is no lawful power to do evil”. Romans 13 tells us that the purpose of civil government is to be a terror to evil doers and an encouragement to those who do well (according to God’s law). Lawless governments are going beyond their power and authority and are not acting as the ministers of God when they command something contrary to the law of God. Such laws may be disobeyed and if necessary resisted because only God is lord of the conscience. 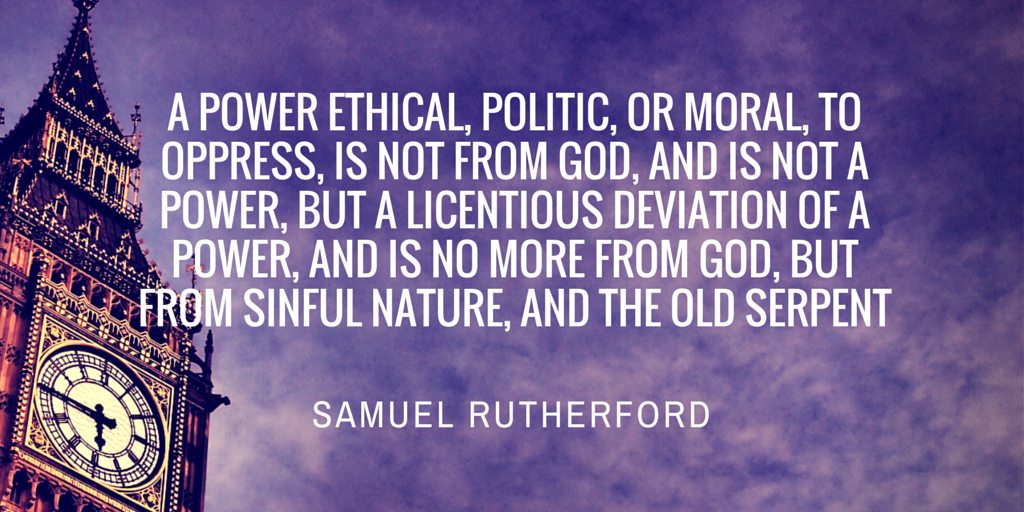 It is also limited by the people through whom power is lent unto rulers as subordinate to the people (see the article What is Political Sovereignty?). “No title could be given to any man to make him king, but only the people’s election”. Rutherford shows from the Old Testament how the consent and choice of the people was essential in making a ruler. Power is only lent to rulers and it can be recovered if they prove to abuse it and use it tyrannically.

It is important to have different levels of representatives involved in government and not just one sole ruler. These representatives can help to recover power when it is abused by the key ruler. It provides for checks and balances to ensure accountability. None of this means that people should rebel at the least abuse of power or matter with which they are displeased. They should suffer long before they take the step of revolution in self-defence and use all lawful and non-violent means of redress in the meantime. When they resist they do not resist the office but the person who occupies the office who has exceeded the limits of the power of that office.

The Piety of Samuel Rutherford

A VISIT TO THE PASTOR’S STUDY

William Shisko interviews Matthew Vogan of Reformation Scotland and Pastor Jim Campbell, a minister of the Orthodox Presbyterian Church. The program gives you an introduction to the life and times of Samuel Rutherford, the 17th century Scottish pastor (who would serve as one of the Scottish representatives to the Westminster Assembly.

A VISIT TO THE PASTOR’S STUDY

William Shisko interviews Matthew Vogan of Reformation Scotland and nd Dr. David Innes, professor of Political Science at the King’s College in Manhattan about Samuel Rutherford’s 1644 volume LEX REX and how it applies to the current political situation in both the United Kingdom and the United States of America.

Listen to Podcast
Download MP3
Samuel Rutherford
Samuel Rutherford (c. 1600 – 1661) was one of the foremost Scottish theologians and apologists for Presbyterianism in the seventeenth century, playing a major role in formulating the Westminster Standards at the Westminster Assembly. He is best known for his many devotional letters and Lex, Rex–his seminal work on political sovereignty.
← Is Uncertainty a Virtue? The Scottish Covenanters (Book Review) →