How Far Should Reformation Go?
Donald Cargill
Donald Cargill (1627 – 1681) was the minister of the Barony Church Glasgow who was dismissed for a protest against the celebration of the restoration of Charles II in 1662. He went on to preach in Covenanter field meetings until he was eventually captured and executed.
12 Jul, 2019

Reformation is not merely an event in the past; it is a present imperative. God’s Word constantly challenges us to ever closer harmony with its teaching. Reformation concerns each one of us. It means taking the authority of the Bible seriously in everything. We need to seek still closer obedience. Not only in our personal lives but also in the life of the Church. We need to reflect on where we are in relation to reformation and what still remains to be achieved as individuals, churches and communities. How do our lives, families and congregations match up to God’s requirements in His Word?

One way of reflecting on such priorities is to consider examples of Reformations in Scripture. There are accounts of reforming work under kings such as Josiah, Hezekiah and Jehoshaphat. Donald Cargill gives a helpful exposition of the Reformation described in 2 Chronicles 19. What did it look like?

What does he do to the general body of the people? Verse 4 shows that “he went…through the people…and brought them back unto the LORD God of their fathers”. They were like runaway servants. So he brings them back again to the Lord. See the duty or office of a ruler – to bring back the people of God to God.

Yet this is the work Jehoshaphat is employed in. He goes through Jacob and brings the people back again to God. They had been like runaway servants, in fact more like the Levite’s concubine that had left her husband and played the harlot. They had been away, but now this holy king employs all his power to bring them back again to God. He thinks that they are good subjects if they are good saints. But what is obedience to him in comparison with obedience to God? Yet the contrary is said and done by the people of this generation. It is plain from the Word of God and Scripture that a ruler has this responsibility. He who has no regard for this ought to be esteemed a ruler no more but rather a tyrant and an enemy to God.

A second aspect of reformation is in the state. What does he do there? He sets judges in every city of Judah etc. Now undoubtedly as he was a holy man himself, so he set holy and good judges in every city. Every ruler chooses those judges that are like himself. The officers and judges in a country will tell you the nature of the rulers. A holy ruler wants holy judges that will give justice to all.

He gives holy judges, and gives them a particular exhortation when he puts them in their office (verse 6). It is remarkable. Anybody would have thought he would have said  “ensure that my prerogatives and privileges are not harmed. Do not let the taxes be decreased. See that the crown rights are not diminished in any way”. It is things similar to this that rulers ordinarily recommend at first. But what does he say? He said to the judges, to take heed because they were not judging for man but for God the Lord. God is with you in judgment. Remember, I commit judgment to you, but the judgment is not mine, it is the Lord’s. Remember that what you do, is for God. Do it as if God Himself would do it. Do it as if He were sitting there.

Now where are there any judges that operate in this way? Where is there a ruler that desires them to do their work in this way? Rulers often say: “judge for me, you have your office from men and therefore judge for me”. But Jehoshaphat says, “I give you authority to judge but remember you must answer to God for your judgment, for God is with you in judgment. That is to say, He is present with you to help you if you do right and to be displeased with you if you judge wrong. He is present to protect you if you do right. But He will be a witness against you and punish you, if you do wrong. He exhorts them to let the fear of God be on them and prevail with them.

God will not approve any unjust counsel.  God reviews all of their judgments and sees how they have judged and He judges them. There is no partiality with God and neither should there be with judges. Nobody rules without being liable to failings in ruling. If all the faults of rulers were precisely scrutinised there would be none who could rule to the end of one day without some faults being found in them. But it is one thing to fail in weakness and another thing to be in a constant course of wickedness and enmity against God. The first may be spared, but not the second.

“He appointed levites and priests in every city, and the chief of the fathers for the judgment of the Lord and for controversies” (2 Chronicles 19:8). He charged them to do this faithfully in the fear of the Lord (2 Chronicles 19:9).  This was the great court in the land where they judged together in the Lord’s matters (i.e. religious matters). It involved priest, levites and elders. The matters of the Lord belonged to them, and the king’s matters belonged to the others. But all was to be judged according to the Word of God. The levites judge in the matters of the Lord and in controversies. There was a great court at Jerusalem and all the difficult matters came there to be decided. There were courts throughout the land with judges of hundreds and of thousands. But all hard matters were brought to Jerusalem. He appoints judges to receive these hard matters that they could not judge among themselves, and they gave judgment in these matters.

He challenges the king for helping the ungodly and loving those that hate the Lord. Would anybody think that a prophet should speak to a king like this? We must be faithful in reproving kings as well as others. To hold back in this is ruin to rulers. Silence in this is not a virtue but a vice. It is unfaithfulness to God and man. The prophet was not afraid to make Jehoshaphat sad for sin.

Helping the ungodly and loving those that hate the Lord: how does this apply to our time?  Whoever helps the ungodly is at fault. If any help the ungodly, they are to be reproved, they are on the wrong side. What will the ungodly do when you have helped them? They will use that help to set up wickedness. There are two sides: the Lord and the godly and on the other side the ungodly. Will you help the ungodly?

It is a general principle that wherever there is an association with wicked men, reformation is forgotten until the association is broken.

This brief overview of the reformation under Jehoshaphat is certainly illuminating and also searching. For instance, reformation in the church meant ensuring that God’s Word was being applied in an organised way. Those who had responsibility in relation to the things of God were to be thoroughly instructed in the Word. People were to be held to account in relation to God’s requirements. This was implemented in a united way. In effect, this reformation includes the whole nation: church and state and all within the nation. A complete reformation is extensive, it goes very far in implementing the authority of the Word of God. We can’t just be concerned about getting back to biblical values in the nation, we also need to be concerned about personal and church reformation. 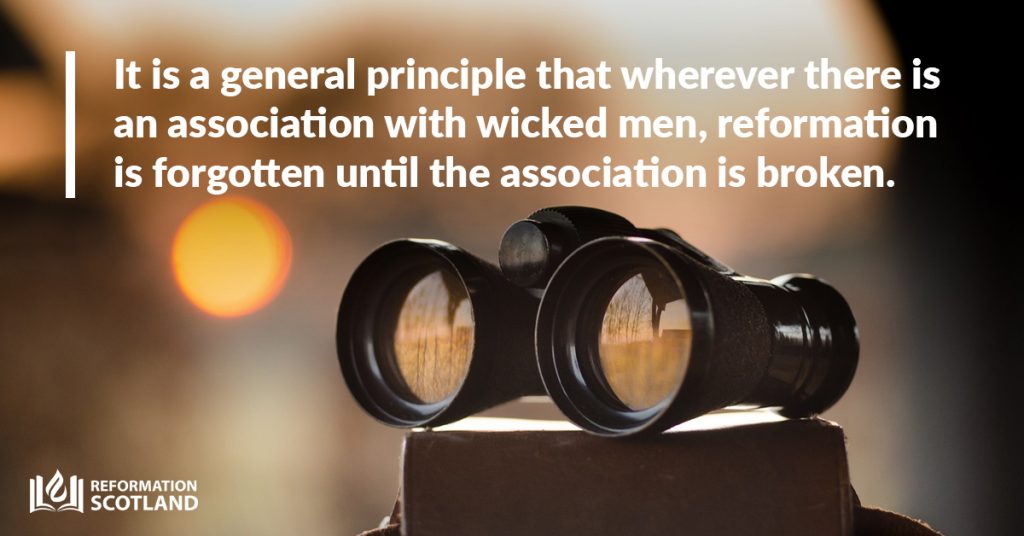 ← How Does Faith Help Love? Recovering True Empathy in a Fractured World →