Does Church Discipline Matter?
James Durham
James Durham (1622-1658) was minister in Glasgow for only eleven years but left a considerable number of writings. One of the co-authors of 'The Sum of Saving Knowledge', he is best known for writing what is still regarded as the classic Reformed work on church unity, division and schism, 'A Treatise Concerning Scandal' as well as a highly sought after commentary on the Book of Revelation.
9 Aug, 2019

Who these days wants authority–especially if it might restrain your freedom? Church discipline won’t be high on the checklist of many Christians looking for a new church. And ministers and elders worry about driving people away by seeming negative. Does anyone worry about church discipline any more? Isn’t it just up to the individual and their conscience? Church discipline may not matter to many people but it matters to Christ. And that ought to make us think. At the Reformation they said that discipline was one of the signs of a true church. Why? Because it’s one of Christ’s main tests of whether a church meets His approval.

James Durham reflects on how when the Lord Jesus Christ emphasises the matter of discipline when He writes to churches in Revelation 2-3. The following is an abridged and updated extract from Durham’s discussion of this theme. He also mentions the great benefit of church government and discipline to individual believers in the Sum of Saving Knowledge. Christ has ordained this gift for His Church so that they are hedged in and helped forward towards keeping the covenant.

What do we mean by church discipline? It’s one of Christ’s gifts to His Church to prevent and correct open disobedience to His Word (2 Corinthians 10:8; Matthew 18:15-20; Matthew 16:19). It involves doctrinal error as well as matters of behaviour (Titus 3:10). Church discipline arises from Christ’s love to His people (Revelation 3:19). Its purpose is Christ’s honour and the Church’s good by avoiding others being tempted to sin in the same way or being harmed spiritually. The spiritual good of the person involved is also in view, it is intended to bring them to repentance.

Discipline may involve private correction or more public rebuke (1 Timothy 5:20). Other cases may involve removing some of the privileges of church membership such as participating in the Lord’s Supper. At its most serious it may be excommunication from the Church (1 Corinthians 5:13). We are always to hope that it will be temporary because it brings the person to repent (1 Corinthians 5:4-5; 2 Corinthians 2:6-10)

The topic of church discipline is very prominent in the letters to the seven churches (Revelation 2-3). When a church is commended or rebuked, it is often largely down to whether they are faithful or defective in administering church discipline.

This shows not only the lawfulness of church government and discipline but also its usefulness, and how necessary it is to the church of Christ when it is faithfully exercised. It is a special means and ordinance appointed by Christ to edify the church. It is not something indifferent which church officers can exercise or not exercise as they please. Rather they have the responsibility to exercise church discipline.

Ministers and elders need to be faithful in this if they want to receive Christ’s commendation on the one hand, and avoid His sharp reproof on the other. They need to be faithful in this for the sake of the people over whom they watch over (and for whom they must give account). Faithfulness in this will prevent people from stumbling and being destroyed. It will also help see them edified and built up in the faith instead.

It is therefore no wonder that the devil is so busy trying to oppose church discipline or undermine it. In the early church he represented church government as inconsistent with civil government and a threat to it–leading emperors to persecute the church. Then he perverted church government into something that tyrannised church members, making even the concept of church authority seem harmful or repugnant to believers. More recently he has been insinuating into people’s minds the idea either that Christ has given the church no distinct form of government at all, or else that the church should be governed in another way from what Christ has appointed in His Word.

3. Church Discipline Matters to the Church

Upholding and submitting to church authority is a necessary duty which concerns all of us (1 Thessalonians 5:12-13). If what we have said about church authority is true, then submission must follow. It is the duty of ministers and elders to discipline (even those who have caused others to stumble). Since this is so, it is also the duty of those who are disciplined to submit and the duty of the church to acknowledge these decisions. Hebrews 13:17 says that we are obey them that rule over us, and submit to them.

People are often very suspicious of ministers and elders, suspecting that they grasp at power for its own sake. They fear that they will be authoritarian and abuse their power. Church authority has always been regarded by the unconverted as bondage, and church officers are always regarded as too proud and rigid etc. But people should seriously consider the following. 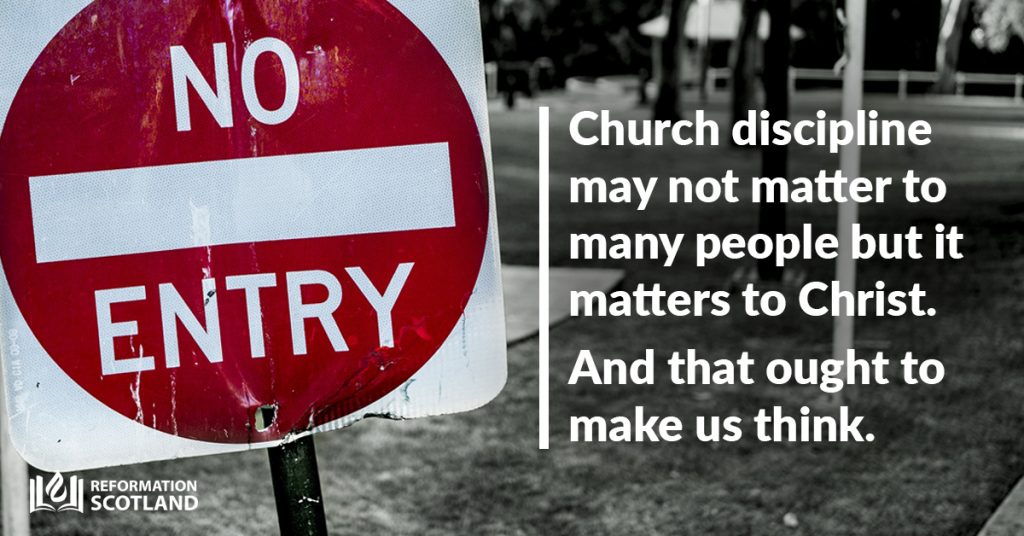 ← Is There a False Religion in Your Home? How Do I Know if My Repentance is Genuine? →