The Most Dangerous Kind of Self-Deception
Andrew Gray
Andrew Gray (1633-1653) was a gifted young preacher who died after a ministry of only 27 months in Glasgow. His sermons were marked by deep spiritual experience. It was said of him, "...never in the history of our country did a man of his years make so deep a mark."
13 Mar, 2020

If the most dangerous form of deception is self-deception, then we must know the most dangerous way of deceiving ourselves. There are all kinds of ways we may overestimate our good qualities or be blind to reality. Scripture warns about deceiving ourselves in spiritual things (1 Corinthians 3:18; James 1:22,26). But when it concerns our eternal good it is of infinite concern. That is unsettling of course, but Scripture does seriously and frequently warn us about this (Matthew 7:20-22). The heart is supremely deceitful (Jeremiah 17:9). That is why we need to examine ourselves (2 Corinthians 13:5; Psalm 139:23-24). We may be able to deceive ourselves but God is not deceived (Galatians 6:7-8). If we simply brush it off for ourselves or pull back from warning others, what are the consequences? It is not just a blight of nominal Christianity on the Church, it is eternal ruin.

We do not want people to be always questioning the reality of God’s grace when it is really there. We want the freeness and fulness of the grace of the gospel to be embraced and enjoyed. But there is also the real danger of a reckless false assurance. Some think that they can make a profession with their mouth while their lives are professing something very different. Others take comfort from all their activity in the life of the Church or how much they know. Surely this means they are the real thing?

We need to address this urgent question. “God knows their/my heart” is too easy a reflex response to avoiding seriously searching questions. Are we blurring the distinction between a real and an empty profession? Andrew Gray sounds a warning note from Galatians 6:3 in this updated extract.

It is when someone:

2. Is Self-Deception a Widespread Problem?

Scripture makes it clear this is a significant problem.

3. Why Should We Be Concerned About Self-Deception?

We need to consider the following to be on our guard against self-deception.

(a) Many Are Self-Deceived
Do Not Think of Yourself More Highly Than You Ought. There are many whose delusion will be exposed when Christ will come and judge the world. This is clear from Proverbs 30:12 and Matthew 7:22. It is more than probable that where there is one who does not mistake, there are six who do mistake. I urge you therefore to search, lest God should be provoked to search and find out your iniquity.

(b) It is Very Hard to Undeceive Ourselves
This is an evil that is very hard to drive people away from, “They hold fast deceit, they refuse to return” (Jeremiah 8:5). No matter what anyone says they will go down to their grave with this, “I am in Christ.” It is exceedingly hard for one under the power of this to abandon their mistake.

(c) Self-Deception is Mocking God
It is, as it were, denying the justice and omniscience of God for a person to live under such a mistake. “Be not deceived, God is not mocked” (Galatians 6:7).

(d) Self-Deception is One of the Greatest Possible Evils
There are seven things that God hates (Proverbs 6:16). But what is that which leads someone to these seven things? It is “a proud look”. If you would not want to make yourselves hateful in the eyes of the Lord, guard against self-deception. There are some who say, “I am holier than thou”; but these are a smoke in His nostrils.

(e) Self-Deception Hardens Us Against the Gospel
There is nothing that hinders the success of the gospel on many men and women’s hearts so much as this: they do not think they need Christ (Proverbs 26:12). There are lies in their right hand, so that they cannot deliver their souls (Isaiah 44:20). The two sorts of people who are furthest away from conversion by the gospel are the presumptuous person and the hypocritical person.

(f) Self-Deception Will Be a Fearful Discovery to Make in Eternity
What a dreadful day some will have who think they are going to heaven, when they will go down to those everlasting flames. They will see their hope has been nothing but as a spider’s web and as a morning dream? I confess, it is one of the most lamentable things to be under this mistaken presumption; it is like an ox going calmly to the slaughter.

4. How Does Self-Deception Happen?

The reason this happens is that many use a false standard for examining themselves and this leads them to a wrong conclusion. Here are the false standards that people use.

(a) An Outward Rather Than Spiritual View of the Law
They use the letter rather than the spiritual meaning of the law than by the spiritual meaning of the law. This was the rule Paul took before his conversion; “I was alive without the law” (Romans 7:9), and, “Concerning…the law, [I was] blameless” (Philippians 3:6). A person may be blameless in their view, according to the letter of the law, to whom Christ will say, “I never knew you: depart from me” (Matthew 7:23). The law reaches to the inward person as well as outwardly. If you never committed one act of iniquity, yet if you think only one evil thought, the law pronounces a curse on you. If many of us sat down to judge ourselves by the spiritual meaning of the law, we might be forced to cry out, “Woe is me! For I am undone.”

(b) Activity Rather than Grace
People judge themselves by their religious activities rather than whether it is done through grace. This is like the Pharisee (Luke 18:12). Judge yourself more by your graces than by your religious duties.

(c) Extraordinary Rather than Ordinary Experience
Some people are ready to judge their condition by the extraordinary experiences they have had rather than their ordinary way of living.

(d) Conscience Rather than the Law
Some people think all is well if their consciences do not speak any evil against them. But the law has much to say to you when your conscience says nothing against you. Some think they can build their eternal blessedness on a peaceful or silent conscience. But do not always believe your conscience.

(e) Good Intentions Rather than Good Practice.
Some say “I have good intentions” when their behaviour is challenged. But if you yourself by your intentions, you may be making a very great mistake. If good intentions could bring someone to heaven, then every slothful person would be in heaven because they have desires (Proverbs 13:4). The gospel and the law require not just intentions but obedience.

(f) Gifts Rather than Grace and Practice.
If you could speak about God like an angel and could understand all the mysteries within the Scriptures, yet still did not practice in some measure what you know, God would say unto you, “I never knew you.”What advantage will you have in knowing alll the excellent things of God, if you do not practice them? If knowledge could have brought people to heaven, Balaam would be a shining star in heaven today. Do not judge yourselves by your gifts and knowledge, but by your graces and practice.
(g) Human Rather than Divine Approval
Some say, “I have the approval of all the saints, I may therefore conclude I will go to heaven.” Although the approval of the saints may sometimes have its own weight, there are some in hell who have had much approval of the saints. Let Christ’s approval be the rule by which you judge yourself. What advantage would it be if every minister called you a saint, but Christ called you a reprobate?

(h) Outward Blessings
You may have temporal blessings such as food, drink and clothing in abundance and yet be a stranger unto God. Do not judge your condition by God’s outward dealings.

5. Why Are People Self-Deceived?

(a) They Do Not Examine Themselves
The apostle follows his warning to help the Galatians guard against presumption with this direction, “Let every man prove his own work” (Galatians 6:4). Search yourselves much using God’s standard. Some are unwilling to examine themselves because it will discourage them others are unwilling because they have already come to the conclusion. “Why do I need to search? Am I not certain that Christ is mine?” But we can never be too sure He is ours.

(b) They Do Not Exercise Faith
Some do not exercise spiritual faith. Faith will help a Christian exceedingly in humbly walking with God (Romans 3:27).

(c) They Boast of What They Have
Paul, reproves those who boasted of the things they had received as though they had not received them (1 Corinthians 4:7). If you are conscious of that, it will keep you humble.

(d) They Are Ignorant of their Corrupt Nature
This is the mother of pride and presumption. When Paul speaks about original sin in Romans 11:25 he warns them of presumption.

(e) They Do Not Consider What They Ought to Be
If someone compared their attainments with what they ought to be, it would crush presumption. If we think we knows anything, we know nothing as we ought to know.

(f) They Compare Themselves With Those Who Are Worse
Some judge themselves by the lives of those who are worse as the Pharisee did (Luke 18:11).

Are you prepared to ask yourself the question, “am I under this mistake and delusion?” The person who is furthest from it will be most ready to ask this question. Search yourselves and see how it stands between God and you. Many assume quickly and easily they are forgiven and at peace with God. It is a matter of eternal concern. This is one of the most dreadful and terrible things we can be, a self-deceiver. Do not think yourselves to be something when indeed you are nothing. 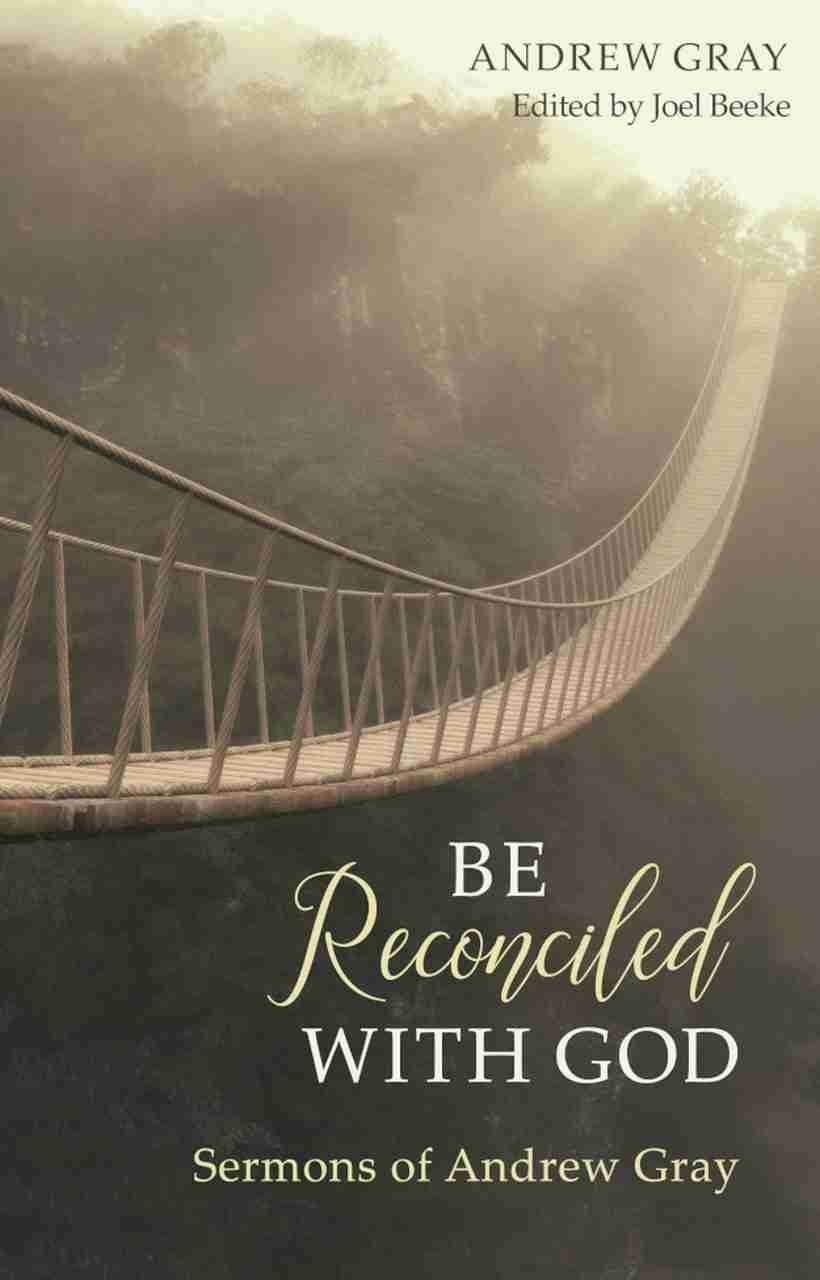 This recently published volume of sermons by Andrew Gray is highly recommended. They are packed with both simple and profound thought communicated with almost tangible passion and highly recommended. There are sermons with evangelistic appeal as well as those that reach the hearts of believers with a uniquely penetrating power.

We have obtained the following special discounts exclusively for Reformation Scotland readers.

North America: Buy it for $15 using the code BERECONCILED50OFF.

North America
United Kingdom
← What if the Coronavirus Comes to Your Home? The Only Absolutely Safe Place of Shelter →