Constantly Delighting in God’s Glory
James Durham
James Durham (1622-1658) was minister in Glasgow for only eleven years but left a considerable number of writings. One of the co-authors of 'The Sum of Saving Knowledge', he is best known for writing what is still regarded as the classic Reformed work on church unity, division and schism, 'A Treatise Concerning Scandal' as well as a highly sought after commentary on the Book of Revelation.
27 May, 2021

When our focus is largely on others it is easy to be distracted and discouraged by what goes on around us. Cultural agendas, noisy opinions, shifting allegiances, spiritual decline and unstable commitments easily occupy our attention. That is understandable since these things often serve to diminish the glory of God being manifested. And after all, glory to God alone is the ultimate purpose for everything. So, it is right to be concerned about them, is it not? Indeed it is, but we need to remind ourselves frequently of what that glory is. We need to be constantly refreshed by and delighted with God’s glory so that it is uppermost in our desires and motivation. We need that light to break through the heavy gloom that we often inhabit.

In the following updated extract, James Durham opens up the meaning of the vision in Revelation 4:8-11 emphasising that is bound up with God’s glory. That is obvious if we define God’s glory being manifested “when men and Angels do know, love, and obey him, and praise him to all eternity” (Edward Leigh, member of the Westminster Assembly). They delight themselves in God constantly, as All-Holy, Eternal and Almighty (v8).

Much of the rest of the book of Revelation unfolds hard experiences for the Church and this view of God’s sovereign dominion is therefore crucial. This vision shows us God ruling all things for the good of His Church and what will happen to it afterwards (4:1). For Durham, it does not just tell us about how God is to be adored and served in heaven, it also tells us about how the Lord manifests His presence in the church on earth. The expectation is expressed here of believers serving Him here and that they will reign on the earth (5:10).

Where God is rightly seen, He will be seen as exceedingly stately and glorious: He is so wonderful whom nothing can resemble, whom no tongue can express, nor eye behold, nor heart conceive. What if we were to imagine thousands of mountains of the most precious stones imaginable, and thousands of suns shining in their brightness? These would still be inconceivably short of God and the glory that is in Him. What an excellent happiness it will be to dwell with this God forever, to behold His face, to see Him as He is, and to be capacitated (so to speak) to know Him, as we are known of Him. Wonder and admire at Him, who is glorious in holiness, fearful in praises, doing wonders, terrible in majesty, and in all perfections past finding out: To Him be praise for ever. Amen.

We see here His absolute and sovereign dominion in heaven and earth. We gather this from the imagery itself, He sits on a throne and has all these attendants waiting on Him. It is also clear from the song whose purpose is to show the great aim God had and has before Him in creating and preserving all things. It is to show Himself glorious on the grounds of His absolute dominion over all creatures.

He is well equipped with means for doing His work. He has attendants fitted with wings and eyes as well as ten thousand times ten thousand and thousands of thousands of angels round about and before His throne to carry out His commands (Revelation 5:11). These glorious spirits wait for directions from Him and are ready to do His commands in caring and providing for His Church. He also has His own Almighty power and thunderings to execute His wrath on enemies as well as for creating things. He has seven Spirits for carrying on the work of grace to spread the everlasting gospel.

The Lord’s great aim in all this, is, to get praise to Himself and to give material for a song to His attendants. And it is comforting that His praise and our song are so joined together, that what is substance of the one, is also substance of the other.

However we may understand these beasts or creatures and the elders here we can learn from their nature and qualities. The creatures have eyes in front, behind and within and each of them has six wings. They are in various forms, like a lion, like a calf, having a face as a man, like a flying eagle. The way in which they are equipped for their work and their activity in it should be an example to believers. Their humble, serious, watchful and speedy manner of going about their work is set forth which shows believers how to act in all commanded duties and aspects of service.

The great dignity and happiness of God’s servants, and attendants is displayed here. However we may expound the words, it is clear that it is a great privilege to be His servants. They sit on thrones, they wear crowns, they are clothed in white, they are all kings and priests to God (Revelation 5:10). Like the angels, they also attend on Him and have places among those that stand by (Zechariah 3.7. It is the consummation of our happiness to have liberty to look on God sitting on His throne. The Queen of Sheba said that Solomon’s servants who had liberty to behold his face and hear his words were blessed (1 Kings 10:8). But O how much more happy are they who day and night do not rest, but are always taken up with beholding and praising God. For, a greater than Solomon is here.

We are taught here what the great task and work of the servants of God should be (and is in some measure). All who have the name of servants of God are to be taken up day and night with magnifying God and making His praise glorious or illustrious (Psalm 66:2). They do this by going about it naturally. We are shown here how we should go about it: with humility and reverence, cheerfulness and zeal. This is to be done by laying all we have before Christ’s feet, acknowledging that all we have received flows from Him and giving Him the glory of it. We are to use it all so that it may contribute most to make Him that sits upon the throne great.

The delightfulness of this task in rejoicing the heart is shown. Though they do not rest day nor night, it is not a wearisome work, for it is singing. When it is said that they do not rest this does not any indicate any burden, yoke or restraint laid on them. Rather it declares the readiness of their spirit within, which with love and joy cannot rest. It is (so to speak) an ease for them to be venting this spirit in praise. There is such joy and cheerfulness from that wine that comes from under the throne, that they cannot hold their peace. It is their continual refreshment, to be speaking and praising night and day. In a word, it says that it is a good thing to be Christ’s servants and that His service is a sweet work. Before long it will be known how good a thing it was to be Christ’s and to be His servants. How happy a life it will be, to be praising Him. It would be good if some effects of it were to warm our hearts beforehand, and that we had the evidence and experience of what it is. May the Lord give us to know it. 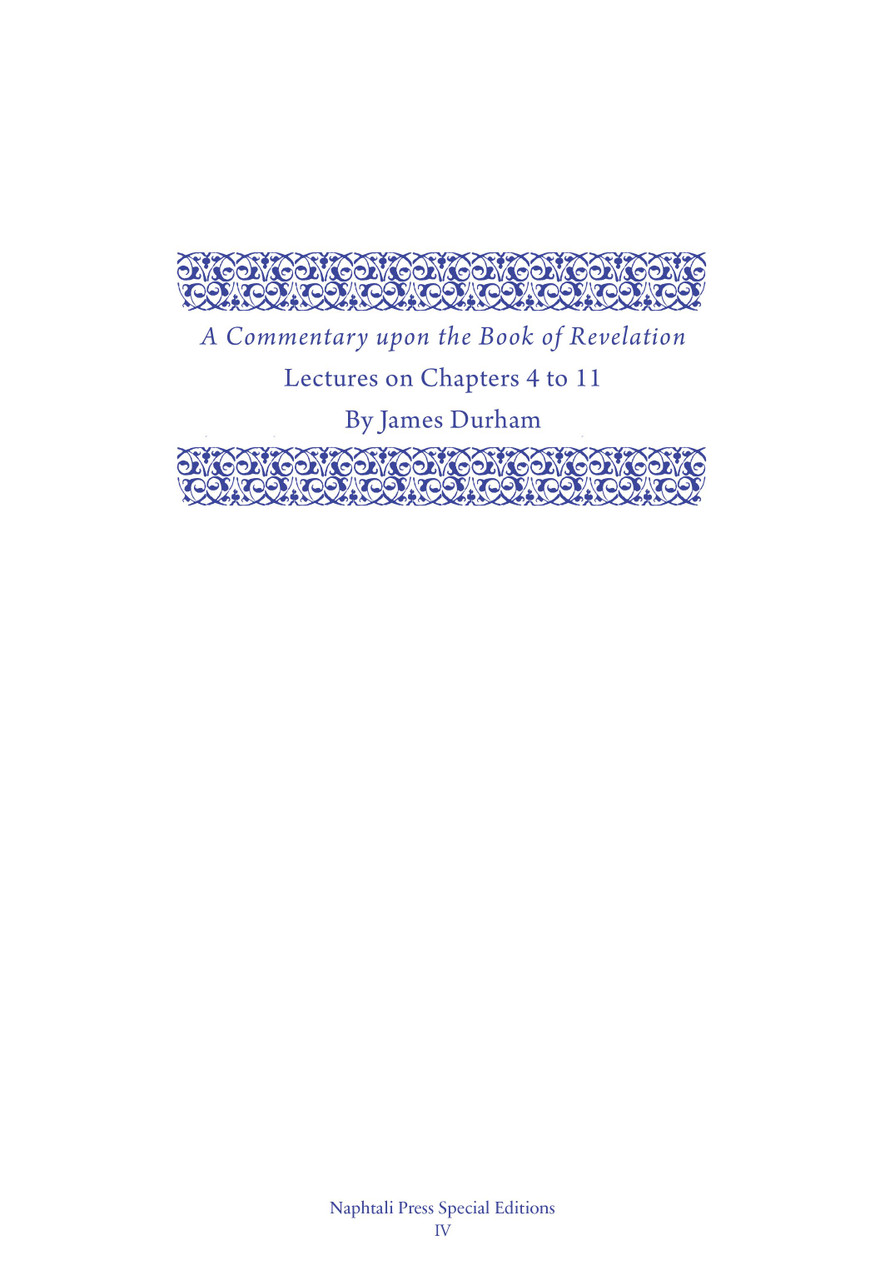 James Durham’s exposition of Revelation is currently being republished. Volume 2, Lectures on Chapters 4–11 is the second of three projected volumes. There are theological essays on such subjects as the nature and extent of the merit of Christ’s death, Christ’s Intercession, the idolatry of the Church of Rome, and the founding of true churches by reformation out of corrupt churches. The text has been collated with a 1653 manuscript which in places is significantly different from the published edition of 1658. John Owen called James Durham, “one of good learning, sound judgement, and every way ‘a workman that needeth not to be ashamed.'” To read Durham on Revelation is to find proof of this. His commentary provides what was, as Principal John MacLeod said, “in past days, the accepted Protestant view of that book”.