The Devotional Value of the Westminster Confession
Westminster Assembly
The Westminster Assembly was an advisory body of theologians to the English Parliament which met at Westminster from 1643 to 1648. It produced a new range of standards for church order and government, worship and doctrine for the churches of England, Scotland and Ireland that have been used ever since by Presbyterian churches across the world.
12 Aug, 2021

The Westminster Confession of Faith is not simply a document full of doctrinal statements. It has a practical and devotional use for every Christian. It is a document that may be made utterly personal. It is both for the church and for the individual. It is the role of the church to confess, to worship God, and to structure itself as God requires. But it is also the role of individuals to take an informed and intelligent approach to confession, worship, and organisation—both as individuals, in their personal devotions, and as members of the body of the church.

People’s personal grasp of the many doctrines taught in Scripture and from the pulpit can be quite fuzzy and patchy. The Westminster Confession offers a precise articulation of the key doctrines of Scripture in a systematic manner so that you can be clear and orderly about the truth in your own mind.

With a clear understanding in place, then you can respond with the appropriate worship. Our devotions can only be enhanced as we grow in an accurate knowledge of what God is like and what God has done. Our best devotional responses of praise and adoration spring out of our best grasp of the identity of our Saviour and the nature of the salvation He provides.

The personal commitment and attachment to doctrine from the vows that office-bearers often take when they subscribe to the Confession. They are often asked, is this “the confession of your faith”?  They must own it in a personal way as the confession not simply of the Church but of their own faith.

They confess publicly that the truths of this document have become their convictions by the work of the illumination of the Holy Spirit on the Word of God. They have come to love them. The fact that they have not written the words themselves is not relevant. It cannot reduce their personal devotion to the truths. They are able to make use of them because it is the same Spirit that has opened the mind and heart to receive them.

Paul Woolley comments on the fact that “most modern people hold the view that a creed is something to be forced, or imposed on other people. That is utterly perverse …. Nothing could be further from the proper function for a creed. It ought to be a very joyful affirmation of the truth which has benefited the affirmant, and which he wants to pass on to others in a clear and simple form.”(Paul Woolley, ‘What is a Creed for?’ in Scripture and Confession, ed. John H. Skilton).

The embodiment of the gospel

BB Warfield calls attention to some of the reasons as to why the Confession possesses this character. It is because the Westminster divines ‘wrote these definitions aiming before all things to be saints: is it strange that we see the saint through the theologian and have our hearts warmed by the contact? Certain it is that the Westminster Standards have a spiritual significance to us which falls in no wise short of their historical and scientific significance.
Open these standards where you will and you will not fail to feel the throb of an elevated and noble spiritual life pulsing through them. They are not merely a notably exact scientific statement of the elements of the gospel: they are, in the strictest sense of the words, the very embodiment of the gospel.

They not only know what God is; they know God: and they make their readers know Him—know Him in His infinite majesty, in His exalted dominion, in His unlimited sovereignty, in the immutability of His purpose and His almighty power and universal providence, but know Him also in that strangest, most incomprehensible of all His perfections, the unfathomableness of His love. Their description of Him transcends the just limits of mere definition and swells into a paean of praise—praise to Him who is “most loving, gracious, merciful, long-suffering, abundant in goodness and truth, forgiving iniquity, transgression and sin, the rewarder of them that diligently seek Him.”

And how profound their knowledge is of the heart of man—its proneness to evil, its natural aversion to spiritual good, its slowness of response to spiritual influence, the deviousness of its path even under the leading of the Holy Ghost. But, above all, they know, with a fulness of apprehension which startles and instructs and blesses the reader, the ways of God with the errant souls of men—how He has condescended to open the way to them of having fruition of Him as their blessedness and reward, how He has redeemed them unto Himself in the blood of His Son, and how He deals with them, as only a loving Father may, in disciplining and fitting them for the heavenly glory.

Where elsewhere may we find more vitally set forth the whole circle of experience in the Christian life—what conversion is and how God operates in bringing the soul to knowledge of Him and faith in its Saviour, what are the joys of justifying grace and of adoption into the family of God, and what the horrors of those temporary lapses that lie in wait for unwary steps, and what the inconceivable tenderness of God’s gracious dealings with the stumbling and trembling spirit until He brings it safely home? Who can read those searching chapters on Perseverance and Assurance without feeling his soul burn within him, or without experience of a new influx of courage land patience for the conflicts of life?

It is not a singular experience which Dr. Thornwell records, when he sets down in his journal his thanksgiving to God for this blessed Confession. “I bless God,” he writes, “for that glorious summary of Christian doctrine contained in our noble Standards. It has cheered my soul in many a dark hour, and sustained me in many a desponding moment.”

We do not so much require as delight, with consentient mind, in his testimony, when he declares that he knows of “no uninspired production in any language, or of any denomination, that for richness of matter, soundness of doctrine, scriptural expression and edifying tendency can for a moment enter into competition with the Westminster Confession and Catechisms.” The Westminster Standards, in a word, are notable monuments of the religious life as well as of theological definition, and, speaking from the point of view of vital religion, this is their significance as a creed.” (BB Warfield “The Significance of the Westminster standards as a creed”).

John Murray in “The Work of the Westminster Assembly” wrote similarly. ‘The work produced by the Westminster Assembly has lived and will permanently live. The reason is obvious. The work was wrought with superb care, patience, precision, and above all with earnest and intelligent devotion to the Word of God and zeal for His glory. Sanctified theological learning has never been brought to bear with greater effect upon the formulation of the Christian Faith. While it would be dishonoring to the Holy Spirit to accord to these documents a place in any way equal to the Word of God either in principle or in practical effect, yet it would also be dishonoring to the Holy Spirit, who has promised to be with His church to the end, to undervalue or neglect what is the product of His illumination and direction in the hearts and minds of His faithful servants. Other men laboured and we have entered into their labours’.

It should be our delight to find increasing devotional value and spiritual significance within the Confession, simply because its doctrines are the doctrines of Scripture. Devotion must be derived from and feed upon the fulness of the truth. As Thornwell puts it, our devotional requirements will be met in the “richness of matter, soundness of doctrine, scriptural expression and edifying tendency” of the Westminster Confession of Faith.

Our Faith helps to unpack the Confession of Faith to get most from it. Its simple approach helps everyone engage with it and grow in their understanding of Scripture. 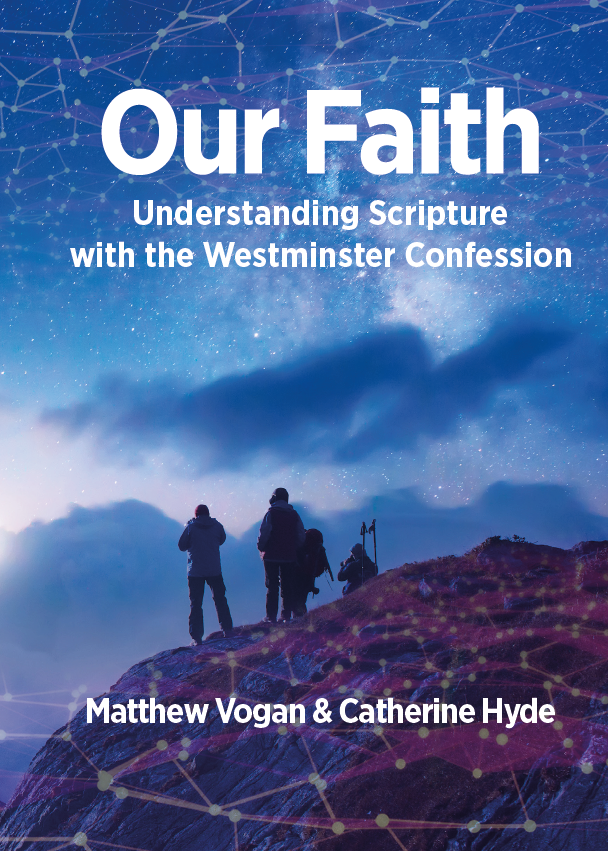