How Will We Help Generation Z Keep the Faith?
David Dickson
David Dickson (c.1583–1662) was a Professor of Theology at the University of Glasgow and Edinburgh who wrote commentaries on many different books of Scripture. He opposed the unbiblical worship and church government foisted on the Church in Scotland by Charles II and this cost him his position.
14 Sep, 2021

Generation Z (aged 9 to 24) is the least religious, most post-Christian generation. Even many of them who have a religious affiliation report that they are not committed to it. Yet this does not mean a lack of interest in faith and spirituality. According to some UK surveys, they are more open and positive about faith than older generations, though spiritually illiterate. They are living in a different world, with different pressures and different rules. It is a confused generation growing up in secular age, a rapidly changing culture where what matters most is the individual and their feelings. What matters to this generation are authenticity, diversity, fluidity, inclusion and activism – how do we reach them with the truth? How are we to train our children not just to survive but to serve their generation?

Generation Z have grown up with the internet in their pocket, saturated with information but starving for truth. As a generation, they seem to want to be protected and insulated from ideas that make them uncomfortable or “unsafe”. There are real challenges in raising children in a generation that seems completely disconnected from Christian truth and values, as well as difficulty in reaching that very generation. We need to prepare young people for the world around them rather than a world that no longer exists. They need more than mere church attendance, they need to know what they should believe and why.  It can be intensely hard to be “the only one” who stands apart amid such trends.

We have to take seriously what it means to pass on the faith, fully and intact to the rising generation. The key sphere for this is one that many young people in Gen Z profess to value a huge positive influence. They value relationships, not just with friends but also with their family. In a 2017 Youth for Christ Survey, 82% of young people said that making their family proud was their number one priority, and 73% who believed in God said their family was the main influence on their faith. In a generation that knows the fragility of families and pressures on them more than ever, they need families where living and believing the faith are central.

The beginning of Psalm 78 speaks of the need to pass the faith from one generation to another. God has given us His Word for this purpose (v1 and 4). There may be ancient things that are mysterious in it and foreign to contemporary thinking (v2), yet we are to know, understand it as well as to praise God for it (v3-4). He has given it to us to believe and obey (v5-6), we are also to show the next generation how to do this (v7) and avoid all examples of disobedience and backsliding (v8). This is shown from the example of Israel (using the name of Ephraim, the most mighty and numerous tribe). They were deserted by God in battle because their confidence was in their own resources and strength rather than believing in God. They disregarded the covenant they had entered into with God, disobeyed His commands and did not make use of the works He had done (v9-11). The resources they depended on could become useless to them; God could take away their wisdom, courage, strength, and success in chastising them. In the following updated extract, David Dickson shows what it means to pass on the faith to another generation.

1. We Must Give Them Scripture Truth

Those are worthy of the name of fathers in the Church who transmit to posterity the truth of God contained in Scripture, such as is here prescribed in this Psalm. This is the only infallible sort of tradition, which delivers to posterity what God delivered to the prophets or their predecessors by Scripture.

The godly in every age ought to have the same care to transmit the Word of truth to their posterity, which their ancestors had to transmit it to them. Thought ought to pay the debt they owe to their faithful ancestors to succeeding generations; they will not hide them from their children.

The Word of the Lord has true antiquity; divine doctrine is no new doctrine, it is “of old.” And for this reason should we hear it attentively and believingly. Although the Word of the Lord is a mystery and “dark sayings” to the unbelieving multitude of the world, yet it is understood, received and believed by the true members of the Church from age to age. The prophet, speaking of himself and the godly in his time, says that their parables and dark sayings are those “which we have heard and known, and our fathers have told us.” Although the Word of the Lord is plain to the attentive believer, to the inattentive unbeliever it is a hidden mystery. For this reason, we need to hear attentively and believingly.

2. We Must Show Them the Glory of God

The subject matter of sound and saving doctrine is to declare the glory of God in His attributes and wonderful works for His people (v4).

3. We Must Teach Them to Obey God’s Word

The Scriptures were not only appointed for a rule to those to whom they were first directed. They were also for use by the Church in all ages following. Everyone must strive to understand and obey these themselves. They must also teach their children and those for whom they have a responsibility to understand and obey them. God gave this testimony and law that “they should make them known to their children, that the generation to come might know them” who would “arise, and declare them to their children” (v6).

4. We Must Teach Them to Trust God

The purpose of revealing and teaching God’s Word is to bring about and increase faith in God as well as dependence on Him. The Word was to be declared to their children “that they might set their hope in God” (v7).

5. We Must Teach Them to Remember God

The way to foster faith and hope in God is to observe, consider and keep in a sanctified memory, how God has already confirmed His Word by His works. Such are evidences and pledges of His power and purpose to perform what He has said. Therefore the duty of not forgetting His works is combined with the duty of setting their hope in God. This implies that if His works were forgotten, His Word would not be believed and faith and hope in God would not remain constantly fixed on God (v7).

6. We Must Teach Them to Honour God’s Commands

The faith and hope which God desires His people to have fixed on Him are such as may produce obedience to His precepts. He, therefore, adds keeping God’s commandments to hoping in God and not forgetting His works. This, therefore, is the summary of true religion:

7. We Must Teach Them to Avoid Disobedience

The example of fathers is not to be followed except in the ways they have followed the Lord. Where their conduct does not conform to God’s Word we must not be like them. He says therefore that they must follow God’s Word that they “might not be as their fathers … stubborn.”

The natural inclination of corrupt mankind is to go on in our sinful course obstinately no matter how much God forbids us. We go contrary to His commands and flatly to refuse to obey Him. If at any time we seem to serve Him while we remain unreconciled to Him, we do it out of corrupt principles and for corrupt ends. Where this is the case, whatever we oblige ourselves to do by covenant we do it as double-hearted persons, dealing deceitfully and turning back from it. This was the case with the unregenerate Israelites: “A stubborn and rebellious generation, a generation that set not their heart aright, and whose spirit was not steadfast with God.”

Nothing can take us from this natural course and sinful inclination unless faith and hope in God and obedience to His commands are begun and maintained in us by the Word of God. The connection between these duties mentioned previously and this example teaches us this.

The Lord will have His people heed His reproofs obediently and not reject His yoke. They must meekly submit to His government and not rebel. They must strive for real affection towards God and steadfastness in His covenant. We are taught this by the way these carnal Israelites are condemned for the faults to the contrary.

The cause of general calamities coming on God’s people is to be found in their sins which have provoked the Lord against them. God will convict them by judgements when they will not be convicted otherwise. The Israelites “turned back in the day of battle.” Why? They did not keep the covenant of God and refused to walk in His law.

The sanctified and thankful remembrance of God’s dealings with His people is the way to keep our hearts in love, faith and obedience to God. Thus, to let His works (especially those that are remarkable and wonderful) slide out of our memory and affections is the source of defection from God. It is the cause of falling into carnal ways and confidences, it brings God’s judgments on us.

We need both to teach the rising generation and to give them an example of faithful obedience. If they see us putting our trust in people or resources and disregarding God’s Word and works, they will detect hypocrisy. We need to have confidence in the Word of God rather than clever techniques. Also, if they see the church turning back rather than facing the battles of our day, they will wonder about the reality of our convictions. Generation Z has unique challenges on top of those faced by those growing up in previous eras. If we do not equip our youth for them with the Word we have received – we will fail them, the future of the Church and ultimately the Lord Himself.

Bible Truth Explored provides a helpful resource in seeking to teach and explain the faith to young people. 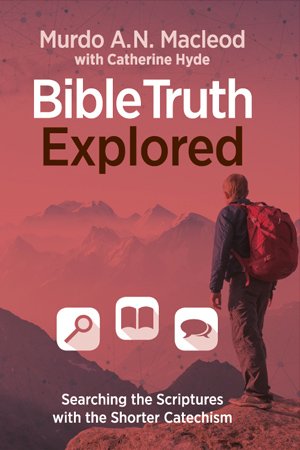 ← How to Avoid Being Catechised by the World What Do We Need to Please God? →